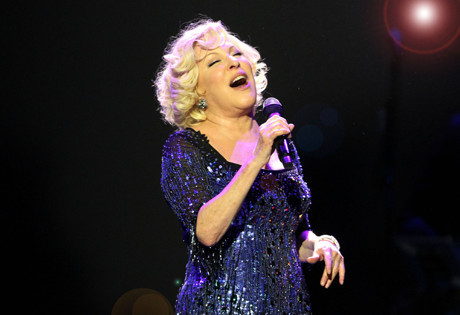 Start by filling out our no-obligation entertainment request form to check pricing and availability for Bette Midler or whoever else you may want.

Our Bette Midler agent will be happy to help you get Bette Midler's availability and booking fee, or the price and availability for any other A-List entertainer, band, comedian or celebrity you may want for your corporate event, private party, wedding, birthday party or public show.

Born in Patterson, New Jersey, but raised in Hawaii, Bette Midler has enjoyed a remarkable and wide-ranging career since 1972. As a young child, she showed an interest in acting and singing, and by the early 1960’s Bette Midler found herself in New York pursuing a career in entertainment.

She quickly landed a role in Fiddler on the Roof on Broadway, and around the same time developed her own nightclub act that included not only singing pop hits and show tunes, but also a sharp-witted blend of comedy. It wasn’t long before Better Midler signed to Atlantic Records and released her debut album,
The Divine Miss M (1972.) The album, which included a cover of the Andrews Sisters' "Boogie Woogie Bugle Boy," went on to enjoy gold status. Her follow up album, Bette Midler, was equally successful upon its release in 1973.

In 1979, Bette Midler appeared in the critically acclaimed film The Rose, a fictional account of the life of Janis Joplin. The film’s title track quickly became a massive hit and an iconic song which has endured popularity well into the new millennium. Similarly, the song “Wind Beneath My Wings,” from the 1989 film Beaches, was Bette Midler’s next pop hit, and in 1990 Some People's Lives hit the charts. On the strength of the single “From a Distance,” the album went on to sell over a million copies. For the Boys was not only a successful film but the soundtrack also went on to achieve gold status. Bette Midler Sings the Peggy Lee Songbook was released in 2005, and earned Bette Midler a Grammy nomination and sales exceeding 50,000 copies in just its first week.

Better Midler’s career continues non-stop with little sign of slowing down. She recently appeared on Broadway in the revival of Holly, Dolly! in 2017, a role which earned her a Tony Award for Best Actress in a Musical. On the big screen, Midler can also be seen in the 2017 film Freak Show.

For more information on booking Bette Midler, please contact Booking Entertainment. One of our top booking agents will be happy to work on your behalf to get you the best possible price to book any big name entertainer for your upcoming public, private or corporate event worldwide.

Booking Entertainment works to get the best possible Bette Midler booking fee and Bette Midler price for our clients while also providing the celebrity or famous entertainer with the level of professionalism and industry norms that they expect from an event run by a professional booking agency and production management.

Booking Entertainment uses our agency / management relationships and over 25 years of production experience to help buyers of headline / top name entertainers and does not claim or represent itself as the exclusive Bette Midler agent, manager or management company for any of the artists on our site.

Booking Entertainment does not claim or represent itself as the exclusive booking agency, business manager, publicist, speakers bureau or management for Bette Midler or any artists or celebrities on this website.