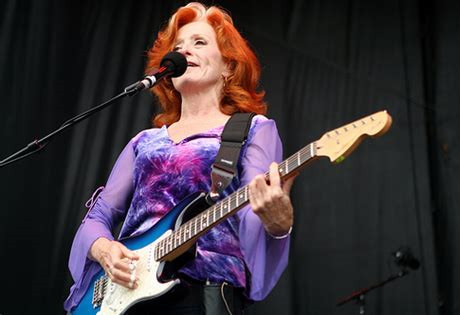 Start by filling out our no-obligation entertainment request form to check pricing and availability for Bonnie Raitt or whoever else you may want.

Our Bonnie Raitt agent will be happy to help you get Bonnie Raitt's availability and booking fee, or the price and availability for any other A-List entertainer, band, comedian or celebrity you may want for your corporate event, private party, wedding, birthday party or public show.

On the surface, it would seem that Bonnie Raitt’s seamless blend of rock, R&B and blues, which captured mainstream attention, was a near overnight success. However, it was almost twenty years before Raitt’s talents brought her the critical acclaim we associate with her today.

Bonnie Raitt found her voice in the blues after picking up a guitar at the age of twelve. The daughter of John Raitt, a Broadway performer best known for Carousel, Oklahoma!, and The Pajama Game, Bonnie Raitt was born in 1949. Although she entered Harvard’s prestigious Radcliffe College in 1967, Bonnie Raitt eventually swapped her studies in Social Relations and African Studies for her true calling. Riatt ultimately found her voice on the Boston blues and folk club circuit.

After signing with Warner Bros., under the guidance of the highly reputable blues manager Dick Waterman, Raitt’s recording debut was released in 1971. Bonnie Riatt  was a quick favorite with the critics, not only for a thoughtful song selection and soulful vocals, but as one of the few women to play slide guitar the album also established her rare guitar-playing skills. Give It Up, Takin’ My Time, Streetlights, and Home Plate were all released between 1973 and 1975, but Bonnie Raitt’s ultimate hit single was “Runaway,” her cover of the Del Shannon classic song, which appeared on her 1977 album Sweet Forgiveness. In 1988, Bonnie Raitt re-launched her career with Nick of Time. The album garnered her Album of the Year and a handful of other Grammys. Luck of the Draw, in 1991, was also a smash hit, and included the singles “I Can’t Make You Love me” and “Something to Talk About.”

After Longing in Their Hearts, released in 1994, Raitt’s Fundamental was released in 1998. In March of 2000, Bonnie Raitt was inducted into the Rock and Roll Hall of Fame, and two years later, in 2002, she released Silver Lining, followed by Souls Alike in 2005. The album Slipstream followed in 2013, earning Raitt a Grammy for Best Americana Album.

Bonnie Raitt remains a formidable creative force and political activist for a variety of causes, including disaster relief and environmental protection. Raitt lists among Rolling Stone’s 100 Greatest Singers of All Tim, and also among its 100 Greatest Guitarists of All Time. Raitt’s most recent album, Dig In Deep, arrived in 2016. It rose into the top ten on the mainstream charts in the United States.

For more information on booking Bonnie Raitt, please contact Booking Entertainment. One of our top booking agents will be happy to work on your behalf to get you the best possible price to book any big name entertainer for your upcoming public, private or corporate event worldwide.

Booking Entertainment works to get the best possible Bonnie Raitt booking fee and Bonnie Raitt price for our clients while also providing the celebrity or famous entertainer with the level of professionalism and industry norms that they expect from an event run by a professional booking agency and production management.

Booking Entertainment uses our agency / management relationships and over 25 years of production experience to help buyers of headline / top name entertainers and does not claim or represent itself as the exclusive Bonnie Raitt agent, manager or management company for any of the artists on our site.

Booking Entertainment does not claim or represent itself as the exclusive booking agency, business manager, publicist, speakers bureau or management for Bonnie Raitt or any artists or celebrities on this website.