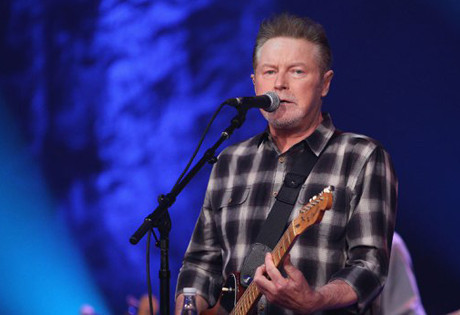 Start by filling out our no-obligation entertainment request form to check pricing and availability for Don Henley or whoever else you may want.

Our Don Henley agent will be happy to help you get Don Henley's availability and booking fee, or the price and availability for any other A-List entertainer, band, comedian or celebrity you may want for your corporate event, private party, wedding, birthday party or public show.

When Glenn Frey invited Don Henley to join him as a member of the backup band for Linda Ronstadt, it was only a matter of time before the Eagles would be founded, after Don Henley and Frey discovered Randy Meisner and Bernie Leadon to join them.

The debut album for The Eagles spawned “Witchy Woman,” which Don Henley himself wrote, and “Take It Easy,” both of which were top twenty singles. The group enjoyed success throughout the 1970’s, but in 1980, when Glenn Frey launched his solo career, the Eagles disbanded. The breakup encouraged Don Henley’s decision to launch his own solo career, and “Dirty Laundry” became his first hit single. Building the Perfect Beast, Don Henley’s 1984 solo album, went double platinum and gave him four Top 40 hits, including “All She Wants to Do is Dance” and “The Boys of Summer.” The End of Innocence, Don Henley’s third and triple platinum album, was released in 1989 and for a staggering 148 weeks stayed on the charts.

In 2006, Don Henley appeared on Kenny Roger’s album Water & Bridge with the duet “Calling Me,” and in 2007 Henley performed “Break Each Other’s Hearts Again” with Reba McEntire on her 2007 album, Reba: Duets. In total, Don Henley’s achievements include twenty-five Top 40 singles and a total of eleven albums – four as a solo artist and seven with The Eagles. Rolling Stone ranked Don Henley as the 87th greatest singer of all time in 2008.

In addition to his achievements in the music industry, Don Henley’s extraordinary efforts to preserve Walden Woods, the forest area near David Henry Thoreau’s Walden Pond, have spearheaded a major campaign and environmental movement supported by many of his fellow musicians. Don Henley also co-founded the Caddo Lake Institute in 1993, a non-profit created to provide funding for ecological research and education. The foundation also seeks to protect the wetland areas in Texas where Henley grew up. The foundation has achieved remarkable success in its efforts.

Don Henley continues to perform, record, and tour. Henley was recently recognized with the Trailblazer Award from the Americana Music Honors & Awards in 2015; a year later, he was nominated for a Grammy for his collaborative single, “The High Cost of Living.” Henley’s latest album, Cass Country, arrived in 2015.

For more information on booking Don Henley, please contact Booking Entertainment. One of our top booking agents will be happy to work on your behalf to get you the best possible price to book any big name entertainer for your upcoming public, private or corporate event worldwide.

Booking Entertainment works to get the best possible Don Henley booking fee and Don Henley price for our clients while also providing the celebrity or famous entertainer with the level of professionalism and industry norms that they expect from an event run by a professional booking agency and production management.

Booking Entertainment uses our agency / management relationships and over 25 years of production experience to help buyers of headline / top name entertainers and does not claim or represent itself as the exclusive Don Henley agent, manager or management company for any of the artists on our site.

Booking Entertainment does not claim or represent itself as the exclusive booking agency, business manager, publicist, speakers bureau or management for Don Henley or any artists or celebrities on this website.