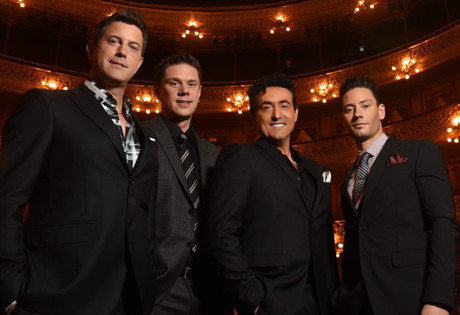 Start by filling out our no-obligation entertainment request form to check pricing and availability for Il Divo or whoever else you may want.

Our Il Divo agent will be happy to help you get Il Divo's availability and booking fee, or the price and availability for any other A-List entertainer, band, comedian or celebrity you may want for your corporate event, private party, wedding, birthday party or public show.

The individual members of Il Divo have impressive backgrounds that help them to create a group filled with immeasurable talent. Sebastien Izambard began his career as a pop musician and accomplished instrumentalist and composer, and was preparing for a second album when he joined up with Il Divo.  Carlos Marin and David Miller both had roles in a number of operas and musicals, such as Les Miserables, Grease, West Side Story, and La Boheme prior to joining the group. Urs Buhler sang in a cover band while growing up in Luzern and went on to perform on stage, singing at the Salzburg Festival and with the Netherlands Opera Gezelschap, before joining Il Divo.

Il Divo sings in four languages – Italian, Spanish, English, and French, and has performed for audiences around the globe.  Performances by Il Divo include twenty concert performances with Barbara Streisand in 2006, the half-time show at the 2006 FIFA World Cup, and a performance in Paraguay in 2011 for nearly 34,000 people.  To date, Il Divo has sold more than twenty-six million albums internationally.

For more information on booking Il Divo, please contact Booking Entertainment. One of our top booking agents will be happy to work on your behalf to get you the best possible price to book any big name entertainer for your upcoming public, private or corporate event worldwide.

Booking Entertainment works to get the best possible Il Divo booking fee and Il Divo price for our clients while also providing the celebrity or famous entertainer with the level of professionalism and industry norms that they expect from an event run by a professional booking agency and production management.

Booking Entertainment uses our agency / management relationships and over 25 years of production experience to help buyers of headline / top name entertainers and does not claim or represent itself as the exclusive Il Divo agent, manager or management company for any of the artists on our site.

Booking Entertainment does not claim or represent itself as the exclusive booking agency, business manager, publicist, speakers bureau or management for Il Divo or any artists or celebrities on this website.