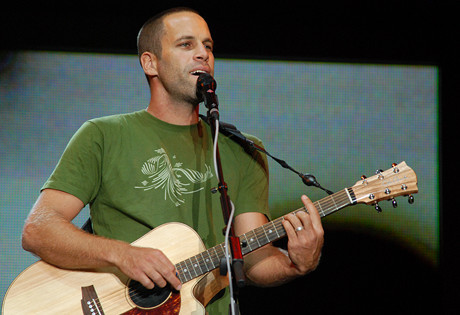 Start by filling out our no-obligation entertainment request form to check pricing and availability for Jack Johnson or whoever else you may want.

Our Jack Johnson agent will be happy to help you get Jack Johnson's availability and booking fee, or the price and availability for any other A-List entertainer, band, comedian or celebrity you may want for your corporate event, private party, wedding, birthday party or public show.

Jack Johnson wasn’t always a musician. The Hawaiian-born performer originally found his muse in the ocean waves. By the age of seventeen, Jack Johnson was a professional surfer, complete with corporate sponsorships and competitive awards. But while studying film at the University of California Santa Barbara, Jack Johnson began to experiment with his songwriting talents. In an interesting twist of fate, it was a surfing film shot and produced by Jack Jackson and his friends that would end up showcasing not only his skills with a camera, but also his skills as a songwriter and performer.

Jack’s first endeavor, Thicker than Water, resulted in critical recognition, and Johnson followed up with The September Sessions, earning him an Adobe Highlight Award at the ESPN Film Festival. But it wasn’t until G. Love & Special Sauce happened upon Jack Johnson’s work that the artist found his big breakthrough. Impressed by his musical talents, G. Love invited Jack Johnson to join them for “Radio Clowns,” which appears on Philadelphonic (1999.) In the meantime, Jack Johnson also prepared a demo reel which garnered the attention of J.P. Plunier, Ben Harper’s producer.

Jack Johnson’s debut full-length album, Brushfire Fairytales, was released in 2001 to critical acclaim. A headlining tour followed, and then came Jack Johnson’s second album, On and On, in 2003. In Between Dreams followed in 2005, and Jack Johnson earned a series of awards, including Brit Awards for International Breakthrough act and International Male Solo Artist. Jack Johnson’s Sing-A-Longs and Lullabies for the Film Curious George was released in 2006, and went on to become the first soundtrack album to reach number one since Bad Boys II (in 2003.) Since that time, Jack Johnson has released the additional albums Sleep Through the Static (2008), From Here to Now To You (2013), and most recently, All the Light Above It Too (2017.)

Jack Johnson is known not only for his talents in the areas of music and film, but also for his commitment to charitable endeavors, particularly those with interests in environmental and social consciousness. He has spearheaded the Kokua Festival three times in the last decade, providing support for a charitable organization which focuses on education in the communities of Hawaii. Johnson also produced Man of the World, the Animal Liberation Orchestra’s studio album, in 2010. He also performed during the Pillars of Peace Hawaii event, with the honor of introducing His Holiness the Fourteenth Dalai Lama of Tibet, Tenzin Gyatso. He continues to write, perform, and contribute to causes which are near to his heart.

For more information on booking Jack Johnson, please contact Booking Entertainment. One of our top booking agents will be happy to work on your behalf to get you the best possible price to book any big name entertainer for your upcoming public, private or corporate event worldwide.

Booking Entertainment works to get the best possible Jack Johnson booking fee and Jack Johnson price for our clients while also providing the celebrity or famous entertainer with the level of professionalism and industry norms that they expect from an event run by a professional booking agency and production management.

Booking Entertainment uses our agency / management relationships and over 25 years of production experience to help buyers of headline / top name entertainers and does not claim or represent itself as the exclusive Jack Johnson agent, manager or management company for any of the artists on our site.

Booking Entertainment does not claim or represent itself as the exclusive booking agency, business manager, publicist, speakers bureau or management for Jack Johnson or any artists or celebrities on this website.