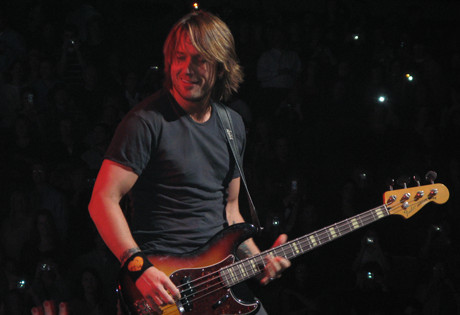 Start by filling out our no-obligation entertainment request form to check pricing and availability for Keith Urban or whoever else you may want.

Our Keith Urban agent will be happy to help you get Keith Urban's availability and booking fee, or the price and availability for any other A-List entertainer, band, comedian or celebrity you may want for your corporate event, private party, wedding, birthday party or public show.

Keith Urban was born in 1967 in Whangarei, New Zealand. Keith grew up in Australia and fell in love with both acting and music when he was still a teenager. With a focus on country music, Urban began perfecting the guitar and performing regularly, becoming a staple in Australia’s growing country music scene in the late 1980’s. By 1990, Keith had signed with Australia’s division of EMI and released Keith Urban, his debut album. After moving to the United States, to Nashville, two years later, he began performing with other country music stars and co-writing songs with them, including Alan Jackson, Charlie Daniels, and Paul Jefferson.

In 1999, Keith Urban released another self-titled American debut, and the album was a smash hit, spawning Urban’s first number one hit with the song “But for the Grace of God” and rising to platinum status.  Urban’s sophomore effort, Golden Road, was even more successful upon its release in 2002. The songs “Who Wouldn’t Wanna Be Me,” “Somebody Like You,” “Raining on Sunday,” and “You’ll Think of Me” all rose into the top 10 and earned Keith his first Grammy, for Best Male country Vocal Performance. Since that time, Urban has released a series of additional hit albums: Be Here (2004), Love, Pain & the Whole Crazy Thing (2006), Defying Gravity (2009), and Get Closer (2010), giving audiences the hits “Days Go By,” “Making Memories of Us,” “Better Life,” “You Look Good in my Shirt,” “Sweet Thing,” “Only You Can Love me this Way,” “Without You,” “Long Hot Summer,” and “You Gonna Fly.”

Most recently, Keith Urban has served as a coach on the reality competition show The Voice and as a judge on American Idol. In 2012, he was inducted into the Grand Ole Opry and recently appeared on Tim McGraw’s song “Highway Don’t Care.” Keith Urban continues to write, perform, and record, and is planning his next studio release in the near future.

For more information on booking Keith Urban, please contact Booking Entertainment. One of our top booking agents will be happy to work on your behalf to get you the best possible price to book any big name entertainer for your upcoming public, private or corporate event worldwide.

Booking Entertainment works to get the best possible Keith Urban booking fee and Keith Urban price for our clients while also providing the celebrity or famous entertainer with the level of professionalism and industry norms that they expect from an event run by a professional booking agency and production management.

Booking Entertainment uses our agency / management relationships and over 25 years of production experience to help buyers of headline / top name entertainers and does not claim or represent itself as the exclusive Keith Urban agent, manager or management company for any of the artists on our site.

Booking Entertainment does not claim or represent itself as the exclusive booking agency, business manager, publicist, speakers bureau or management for Keith Urban or any artists or celebrities on this website.