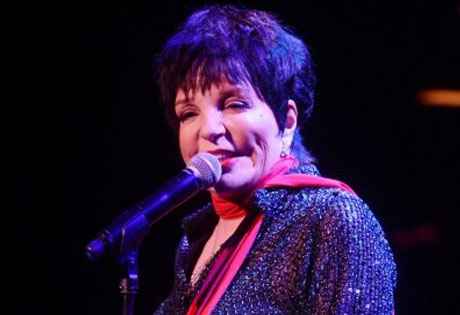 Start by filling out our no-obligation entertainment request form to check pricing and availability for Liza Minnelli or whoever else you may want.

Our Liza Minnelli agent will be happy to help you get Liza Minnelli's availability and booking fee, or the price and availability for any other A-List entertainer, band, comedian or celebrity you may want for your corporate event, private party, wedding, birthday party or public show.

Liza Minnelli’s contributions to the entertainment industry are innumerous. From music to theater to television to film, Liza’s talents have made her one of the most famous and sought-after live performers since she began her career in the early 1960’s.

As the daughter of Judy Garland and the famous film director Vincente Minnelli, Liza Minnelli began her career while still just a baby. She appeared in her parents’ film In the Good Old Summertime in 1949.  By the time she was five, following her parents’ divorce, she was already accustomed to spending time with her father on set and her mother on the road. Her decision to enter show business was solidified by her late teens, and after gaining admittance to the prestigious New York High School for the Performing Arts, she began accepting a variety of roles.

When she was seventeen, Liza Minnelli made her stage debut in the musical Best Foot Forward. The accompanying cast album from the play’s 244-show run also gave Liza her recording debut. Around the same time, Minnelli also performed with her mother on The Judy Garland Show, and in 1964, Liza took roles in Carnival! and The Fantastics, which ultimately lead to a recording contract with Capital Records.

Liza! Liza! was released in 1964, and over the years a string of studio albums followed, including It Amazes Me (1965), There is a Time (1966), Liza Minnelli (1967), Come Saturday Morning (1968), Tropical Nights (1977), Gently (1996), and Confessions (2010.) In addition to her studio albums, Liza appears on a number of cast recordings and soundtracks. Nightclub performances, additional theater roles, and live performances with her mother and on her own also followed over the years, including eleven sold-out performances at Carnegie Hall in 1979.

Today, Liza Minnelli has spent the last four decades performing in some of the most world-renowned venues, including the Talk of the Town nightclub in London and the Persian Room of the Plaza Hotel in New York. Notable screen roles for Liza include: Charlie Bubbles (1968); The Sterile Cuckoo (1969), which brought her an Academy Award nomination; Cabaret (1972); Just One More Time (1974); Lucky Lady (1975); A Matter of Time (1976); New York, New York (1977); and Arthur (1981.) Her stage work and film work has earned her four Tony Awards, an Emmy, two Golden Globes and an Oscar, one of the few entertainers in history to be recognized for such a variety of contributions.

Liza Minnelli continues to record and perform live.  In recent years, she has performed in England at the Hampton Court Palace; in Brooklyn on stage with Cher; and at the IP Casino Resort & Spa, for the 50th anniversary of Flora the Red Menace, in 2015.

For more information on booking Liza Minnelli, please contact Booking Entertainment. One of our top booking agents will be happy to work on your behalf to get you the best possible price to book any big name entertainer for your upcoming public, private or corporate event worldwide.

Booking Entertainment works to get the best possible Liza Minnelli booking fee and Liza Minnelli price for our clients while also providing the celebrity or famous entertainer with the level of professionalism and industry norms that they expect from an event run by a professional booking agency and production management.

Booking Entertainment uses our agency / management relationships and over 25 years of production experience to help buyers of headline / top name entertainers and does not claim or represent itself as the exclusive Liza Minnelli agent, manager or management company for any of the artists on our site.

Booking Entertainment does not claim or represent itself as the exclusive booking agency, business manager, publicist, speakers bureau or management for Liza Minnelli or any artists or celebrities on this website.