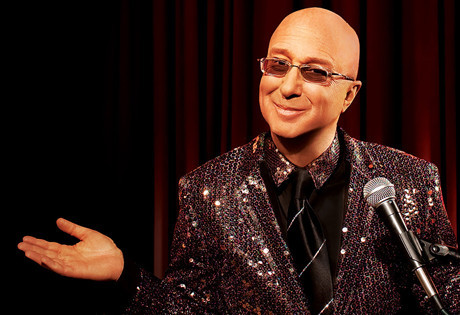 Start by filling out our no-obligation entertainment request form to check pricing and availability for Paul Shaffer or whoever else you may want.

Our Paul Shaffer agent will be happy to help you get Paul Shaffer's availability and booking fee, or the price and availability for any other A-List entertainer, band, comedian or celebrity you may want for your corporate event, private party, wedding, birthday party or public show.

Best known for his longstanding gig as David Letterman’s sidekick and musical director, classically trained pianist Paul Shaffer began his career in the early 1970s as the musical director for the Toronto production of Godspell after graduating from the University of Toronto and performing at different venues around the area.

But Paul Shaffer’s real break, making him an instant celebrity, came in 1982 when he became the musical director/bandleader of the World’s Most Dangerous Band on Late Night With David Letterman, also composing the theme song for the show. Paul Shaffer released his solo Grammy-nominated album, Coast to Coast, in 1989, and when David Letterman and Paul Shaffer moved to CBS in 1993, Shaffer renamed the band the CBS Orchestra and released an album called The World’s Most Dangerous Party that same year.

Paul Shaffer has served as musical director, producer and writer for several notable projects, including the Rock and Roll Hall of Fame induction ceremony (since its inception in 1986) and the 1996 Olympic Games closing ceremonies from Atlanta, Georgia. Shaffer has worked with a host of talented artists over the years, including Donald Fagen, Ronnie Wood, Grand Funk Railroad, Diana Ross, B.B. King, Cyndi Lauper, Yoko Ono, and Cher, just to name a few. Paul Shaffer also wrote and produced the song “It’s Raining Men” with Paul Jabara, which became a hit in the UK for both the Weather Girls and later for Geri Halliwell.

Paul Shaffer released his memoir, We’ll Be Here for the Rest of Our Lives: A Swingin’ Show-biz Saga, in 2009. In 2015, he left his tenure on the Late Show with David Letterman after the show wrapped its run with Letterman at the helm. Most recently, Shaffer reunited with his band to record the album Paul Shaffer & the World’s Most Dangerous Band. An extensive tour of performances followed the release of the album, including one for Stephen Colbert after Colbert took over for Letterman for the show, now titled Late Show with Stephen Colbert.

For more information on booking Paul Shaffer, please contact Booking Entertainment. One of our top booking agents will be happy to work on your behalf to get you the best possible price to book any big name entertainer for your upcoming public, private or corporate event worldwide.

Booking Entertainment works to get the best possible Paul Shaffer booking fee and Paul Shaffer price for our clients while also providing the celebrity or famous entertainer with the level of professionalism and industry norms that they expect from an event run by a professional booking agency and production management.

Booking Entertainment uses our agency / management relationships and over 25 years of production experience to help buyers of headline / top name entertainers and does not claim or represent itself as the exclusive Paul Shaffer agent, manager or management company for any of the artists on our site.

Booking Entertainment does not claim or represent itself as the exclusive booking agency, business manager, publicist, speakers bureau or management for Paul Shaffer or any artists or celebrities on this website.