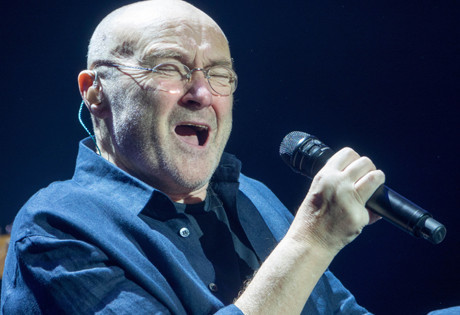 Start by filling out our no-obligation entertainment request form to check pricing and availability for Phil Collins or whoever else you may want.

Our Phil Collins agent will be happy to help you get Phil Collins's availability and booking fee, or the price and availability for any other A-List entertainer, band, comedian or celebrity you may want for your corporate event, private party, wedding, birthday party or public show.

Phil Collins was born in 1951 in Hounslow, London. Collins was drawn to the drums as a young boy, having received his first kit when he was five and playing consistently throughout his youth. Although he never learned to read music, he learned to play mostly by ear and created his own written system so that he could compose.

At the age of fourteen, Phil Collins began studies at a stage school in London, which launched a career as a child model and actor. His earliest role was in the London production of Oliver!, and he even served as an extra in the films Chitty Chitty Bang Bang and A Hard Day’s Night. While still in school, Phil Collins performed in local bands, and continued to perfect his voice and drum skills.

Phil Collins actually garnered his first record deal while drumming for a band called the Flaming Youth. They released only one album, Ark 2, in 1969, but their single “From Now On” failed to chart. It was a year later that Collins encountered the turn of events which would finally lead him on the path to stardom, when he responded to an ad in the Melody Maker. The audition led to his position as drummer for the band Genesis. Phil Collins used his years with Genesis to hone his voice and composition skills, and he was a crucial contributor to some of their greatest albums, including Duke, Abacab, Genesis, and Invisible Touch.

In the early 1980’s, Phil Collins embarked on a solo career, releasing his debut album, Face Value, in 1981. The album exceeded the success Collins had enjoyed with Genesis, and launched one of his biggest hit singles “In the Air Tonight.” A series of hit albums and singles followed, including No Jacket Required (1985), Both Sides (1993), Testify (2002), “Sussudio” (1985), “Two Hearts” (1988), and “Another Day in Paradise” (1989.) Between 1984 and 1990, Phil Collins garnered thirteen Top Ten hits, even though Genesis continued to record and perform together. He left Genesis permanently in 1995.

Phil Collins released Going Back in 2010, and promoted the album with six concerts, including a special broadcast performance for BBC. That same year, Collins was inducted to the Rock and Roll Hall of Fame as a member of Genesis, and in 2011, he embarked on a short hiatus. He returned in 2015 with an announcement that he’d signed with Warner Music Group to issue eight albums of re-mastered and released material. In 2016, Collins published his autobiography, aptly titled Not Dead Yet.

For more information on booking Phil Collins, please contact Booking Entertainment. One of our top booking agents will be happy to work on your behalf to get you the best possible price to book any big name entertainer for your upcoming public, private or corporate event worldwide.

Booking Entertainment works to get the best possible Phil Collins booking fee and Phil Collins price for our clients while also providing the celebrity or famous entertainer with the level of professionalism and industry norms that they expect from an event run by a professional booking agency and production management.

Booking Entertainment uses our agency / management relationships and over 25 years of production experience to help buyers of headline / top name entertainers and does not claim or represent itself as the exclusive Phil Collins agent, manager or management company for any of the artists on our site.

Booking Entertainment does not claim or represent itself as the exclusive booking agency, business manager, publicist, speakers bureau or management for Phil Collins or any artists or celebrities on this website.