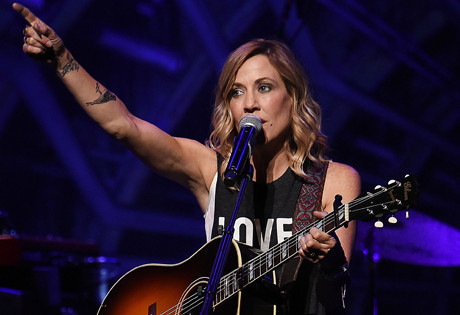 Start by filling out our no-obligation entertainment request form to check pricing and availability for Sheryl Crow or whoever else you may want.

Our Sheryl Crow agent will be happy to help you get Sheryl Crow's availability and booking fee, or the price and availability for any other A-List entertainer, band, comedian or celebrity you may want for your corporate event, private party, wedding, birthday party or public show.

Sheryl Crow’s first career wasn’t as a musician – it was as a full-time teacher. But it wouldn’t be long before her true calling would become clear.

Sheryl Crow’s debut album, Tuesday Night Music Club, was released in 1993, and included her first hit single, “Leaving Las Vegas,” and the equally successful “All I Wanna Do.” The album garnered Sheryl Crow a Grammy for Best New Artist and Best Female Pop Vocal Performance, and set the stage for a career which has since lasted well into the new millennium.

Crow has also provided some iconic songs for the big screen, including the song
“Real Gone” for the soundtrack of the movie Cars; she also served as the voice of Elvis in the film. Her song “Try Not to Remember,” from the film Home of the Brave, earned her a Golden Globe nomination in 2006. A year later, for The Bee Movie, Sheryl Crow recorded a cover of “Here Comes the Sun.”

Today, in the new millennium, Sheryl Crow continues to perform and record. Her latest album, Be Myself, arrived in April of 2017 and features the singles “Halfway there” and “Be Myself.” Crow is also a breast cancer survivor, and after being diagnosed in 2006, she underwent minimally invasive surgery and radiation therapy to become cancer-free. Not surprisingly, she is one of the strongest advocates for women’s health and breast cancer awareness today.

For more information on booking Sheryl Crow, please contact Booking Entertainment. One of our top booking agents will be happy to work on your behalf to get you the best possible price to book any big name entertainer for your upcoming public, private or corporate event worldwide.

Booking Entertainment works to get the best possible Sheryl Crow booking fee and Sheryl Crow price for our clients while also providing the celebrity or famous entertainer with the level of professionalism and industry norms that they expect from an event run by a professional booking agency and production management.

Booking Entertainment uses our agency / management relationships and over 25 years of production experience to help buyers of headline / top name entertainers and does not claim or represent itself as the exclusive Sheryl Crow agent, manager or management company for any of the artists on our site.

Booking Entertainment does not claim or represent itself as the exclusive booking agency, business manager, publicist, speakers bureau or management for Sheryl Crow or any artists or celebrities on this website.