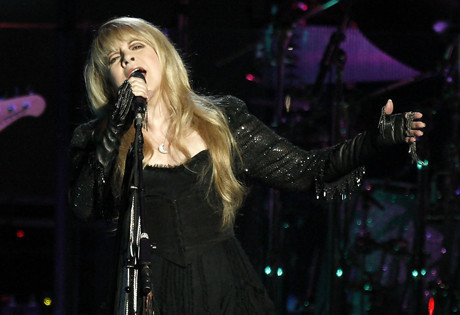 Start by filling out our no-obligation entertainment request form to check pricing and availability for Stevie Nicks or whoever else you may want.

Our Stevie Nicks agent will be happy to help you get Stevie Nicks's availability and booking fee, or the price and availability for any other A-List entertainer, band, comedian or celebrity you may want for your corporate event, private party, wedding, birthday party or public show.

As both a solo artist and a member of Fleetwood Mac, Stevie Nicks may not only be one of rock’s most recognizable voices, but also among the most successful women in music. But long before her rise to fame, Nicks was born in Phoenix, Arizona in 1948, where she began performing at her parent’s tavern at the young age of four. She began writing songs while a teenager, and even joined her first group, The Changing Times, while Stevie Nicks was still in high school.

Stevie Nicks and her friend Lindsey Buckingham, long before they joined Fleetwood Mac, were very popular as members of the band Fritz, which they formed while still in high school. Buckingham-Nicks, their debut album, was released in 1973, and led to the establishment of Fleetwood Mac as one of the world’s most iconic bands of the 1970’s.

Stevie Nicks continues to perform and record well into the new millennium. Notable albums from recent years include In Your Dreams (2011) and 24 Karat Gold: Songs from the Vault (2014), and she also contributed a cover of “Not Fade Away” on Listen to Me: Buddy Holly, a tribute album that was released in 2011. In 2012, Nicks appeared on Up All Night; the NBC sitcom featured an excerpt from the song “Sleeping Angel,” and new duets with Christina Applegate and Maya Rudolph. Nicks also enjoyed a resurgence in popularity of the Fleetwood Mac album “Rumors,” after the television show Glee dedicated a season two episode to Fleetwood Mac; The episode featured six songs from the album, and suddenly Fleetwood Mac and Stevie Nicks found popularity with a whole new generation. Rumors re-entered the Billboard 200 the same week that Nicks’ In Your Dreams debuted at number six.

Most recently, Stevie Nicks performed alongside Tom Petty and the Heartbreakers at the British Summer Time festival in 2017. She also teamed up with the The Pretenders for the 24 Karat Gold Tour, in support of her recently released album collection: 24 Karat Gold: Songs from the Vault.

For more information on booking Stevie Nicks, please contact Booking Entertainment. One of our top booking agents will be happy to work on your behalf to get you the best possible price to book any big name entertainer for your upcoming public, private or corporate event worldwide.

Booking Entertainment works to get the best possible Stevie Nicks booking fee and Stevie Nicks price for our clients while also providing the celebrity or famous entertainer with the level of professionalism and industry norms that they expect from an event run by a professional booking agency and production management.

Booking Entertainment uses our agency / management relationships and over 25 years of production experience to help buyers of headline / top name entertainers and does not claim or represent itself as the exclusive Stevie Nicks agent, manager or management company for any of the artists on our site.

Booking Entertainment does not claim or represent itself as the exclusive booking agency, business manager, publicist, speakers bureau or management for Stevie Nicks or any artists or celebrities on this website.