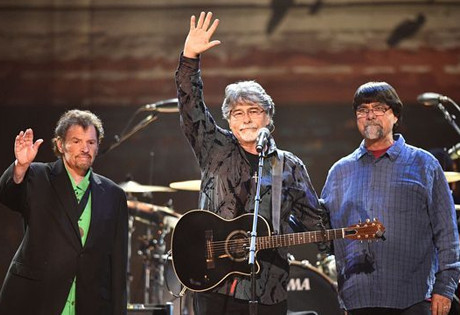 Start by filling out our no-obligation entertainment request form to check pricing and availability for America or whoever else you may want.

Our America agent will be happy to help you get America's availability and booking fee, or the price and availability for any other A-List entertainer, band, comedian or celebrity you may want for your corporate event, private party, wedding, birthday party or public show.

In the early 1970’s, America enjoyed a number of successful Top Ten singles, including "Sister Golden Hair” and "A Horse with No Name,” both which went to number one on the charts. But their success has also lasted through the decades, making them one of the nation’s most enduring classic rock bands.

Band members Dan Peek, Dewey Bunnell, and Gerry Beckley, all sons of United States Air Force members stationed in the U.K., met while still in school. After graduating, they formed a folk-rock group in 1970. Eventually adopting the name America, they found themselves with a Warner Bros. contract and began work on their debut.

America’s debut single, “A Horse with No Name,” was released in 1971 and went straight to number three on the UK charts. America returned to the United States to start a tour with the Everly Brothers. Their hit single quickly hit the charts in the United States, rising to number one. Additional singles, "I Need You" and "Ventura Highway," both went on to be equally successful.

America won the Grammy for Best New Artist of 1972, and went on to enjoy great success throughout the coming decades. In 2006 America returned to the studio with musicians (and fans) James Iha of the Smashing Pumpkins and Adam Schlesinger of Fountains of Wayne to work on a new album. The result, Here & Now, features covers by bands influenced by America’s music, as well as some new material from the band. Additional albums from America in recent years include the studio album Lost & Found (2015) and the compilation albums Archives, Vol. 1 (2015) and An Introduction To: America (2017.)

America was inducted into the Vocal Group Hall of Fame in 2006, and on February 6th 2012, the group was given a star on the Hollywood Walk of Fame. America continues to tour and record with primary members Gerry Beckley and Dewey Bunnell, and touring members Richard Campbell, Ryland Steen, and Andy Barr.

For more information on booking America, please contact Booking Entertainment. One of our top booking agents will be happy to work on your behalf to get you the best possible price to book any big name entertainer for your upcoming public, private or corporate event worldwide.

Booking Entertainment works to get the best possible America booking fee and America price for our clients while also providing the celebrity or famous entertainer with the level of professionalism and industry norms that they expect from an event run by a professional booking agency and production management.

Booking Entertainment uses our agency / management relationships and over 25 years of production experience to help buyers of headline / top name entertainers and does not claim or represent itself as the exclusive America agent, manager or management company for any of the artists on our site.

Booking Entertainment does not claim or represent itself as the exclusive booking agency, business manager, publicist, speakers bureau or management for America or any artists or celebrities on this website.