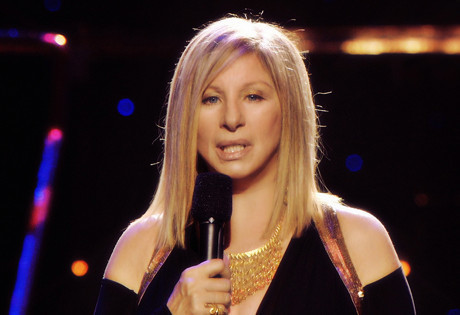 Start by filling out our no-obligation entertainment request form to check pricing and availability for Barbra Streisand or whoever else you may want.

Our Barbra Streisand agent will be happy to help you get Barbra Streisand's availability and booking fee, or the price and availability for any other A-List entertainer, band, comedian or celebrity you may want for your corporate event, private party, wedding, birthday party or public show.

The legendary American actress and singer Barbra Streisand was born in 1942 in Brooklyn, New York. Streisand’s father was a well-respected educator who focused on helping the underserved, but sadly he passed away just a few months after Barbra’s first birthday, thrusting the young child and her mother into poverty. Young Barbra was a highly intelligent, inquisitive child, and she has stated in many interviews that she was strongly influenced by the movies of her youth, which inspired her to become an actress.

But it was her remarkable singing voice that made Barbra stand out from her peers. Throughout her childhood she sang at a number of local events, such as school plays, assemblies, and weddings, and so by the time she was a teenager she’d decided to record her first demo tape. She also began to read biographies on her favorite actresses, study world renowned plays, and explore various acting theories. In 1957 she landed her first stage role, and after graduating early at the age of sixteen, Barbra moved into New York City to begin pursuit of steady acting jobs.

After struggling to find serious acting work, Barbra returned to singing as a means to enter the entertainment business. A performance at a talent contest in Greenwich Village resulted in a standing ovation and a win for the competition, leading to Streisand’s first recording contract. The rest, as they say, is history.

Since then, Barbra Streisand has gone on to become one of the world’s most recognizable and accomplished singers, actors, and film producers. With a career spanning more than fifty years, Streisand is among the world’s best selling performers, with nearly 150 million records sold worldwide, and the only recording artist to date to have number-one albums in each decade of her career.

Her award-winning film performances include roles in Funny Girl, The Owl and the Pussycat, The Way We Were, A Star is Born, and Yentl, and Streisand has earned dozens of industry awards for her work, including nine Golden Globe Awards, ten Grammy Awards, two Academy Awards, and a Daytime Emmy Award, just to name a few.

Today, Barbra Streisand is among the era’s most influential artists and performers. Her work outside of the entertainment industry includes support for various Democratic causes, gay rights, and her own foundation, through which has supported everything from environmental causes to civil liberties and nuclear disarmament.

For more information on booking Barbra Streisand, please contact Booking Entertainment. One of our top booking agents will be happy to work on your behalf to get you the best possible price to book any big name entertainer for your upcoming public, private or corporate event worldwide.

Booking Entertainment works to get the best possible Barbra Streisand booking fee and Barbra Streisand price for our clients while also providing the celebrity or famous entertainer with the level of professionalism and industry norms that they expect from an event run by a professional booking agency and production management.

Booking Entertainment uses our agency / management relationships and over 25 years of production experience to help buyers of headline / top name entertainers and does not claim or represent itself as the exclusive Barbra Streisand agent, manager or management company for any of the artists on our site.

Booking Entertainment does not claim or represent itself as the exclusive booking agency, business manager, publicist, speakers bureau or management for Barbra Streisand or any artists or celebrities on this website.