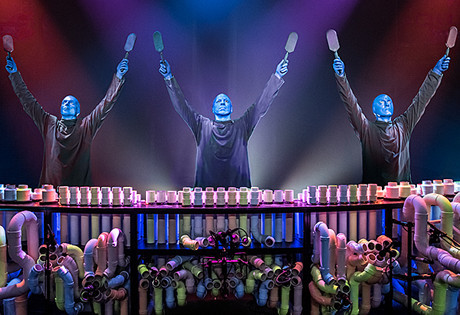 Start by filling out our no-obligation entertainment request form to check pricing and availability for Blue Man Group or whoever else you may want.

Our Blue Man Group agent will be happy to help you get Blue Man Group's availability and booking fee, or the price and availability for any other A-List entertainer, band, comedian or celebrity you may want for your corporate event, private party, wedding, birthday party or public show.

Blue Man Group, founded by Matt Goldman, Chris Wink, and Phil Stanton, is best known for its performances featuring insightful humor and multi-sensory experiences conveyed through the antics of three mysterious, bald, blue men. Without a doubt, a Blue Man Group performance is one like no other. The group itself, however, is actually an organization created by the founders not only for theatrical shows, but also for film and television music and a children’s museum exhibit (called “Making Waves.”)

Matt Goldman and Chris Wink became friends while still attending public school in New York City.  They remained in touch and reunited in Manhattan after finishing college (Clark University and Wesleyan University), and began their endeavors as the Blue Man Group, performing around the city in a variety of venues.

They had yet to create a full-length show, however, until the artistic director of The CLUB @ La MaMa viewed a performance and commissioned them for one. Tubes became the Blue Man Group’s first official show, and it was so well received and critically acclaimed they moved the show to off-Broadway. The quirky qualities of the show and its blue men, always in character (including autographs granted only with a smudge of blue paint) has helped to maintain the mystique of the show and the performers ever since.

Audio was the first recording released by Blue Man Group in 1999, and since then, Blue Man Group has continued to release albums periodically. The Complex followed in 2003, and includes vocals by notable performers such as Dave Matthews and Venus Hum.

Blue Man Group began touring extensively in the new millennium, starting with performances alongside Moby in 2002. Their first headlining tour was in 2003, in support of The Complex, and the How to Be a Megastar Tour 2.0 in 2006 followed, taking them to worldwide locations in Europe and Taiwan. They expanded their horizons even further in 2010, when Blue Man Group began performing nightly shows aboard the Norwegian EPIC.

For more information on booking Blue Man Group, please contact Booking Entertainment. One of our top booking agents will be happy to work on your behalf to get you the best possible price to book any big name entertainer for your upcoming public, private or corporate event worldwide.

Booking Entertainment works to get the best possible Blue Man Group booking fee and Blue Man Group price for our clients while also providing the celebrity or famous entertainer with the level of professionalism and industry norms that they expect from an event run by a professional booking agency and production management.

Booking Entertainment uses our agency / management relationships and over 25 years of production experience to help buyers of headline / top name entertainers and does not claim or represent itself as the exclusive Blue Man Group agent, manager or management company for any of the artists on our site.

Booking Entertainment does not claim or represent itself as the exclusive booking agency, business manager, publicist, speakers bureau or management for Blue Man Group or any artists or celebrities on this website.