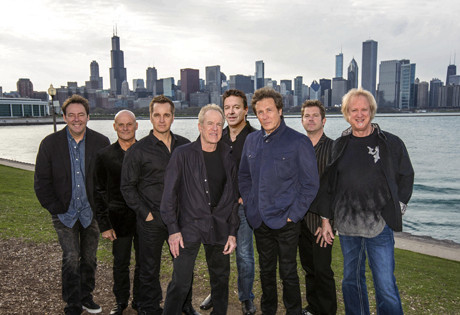 Start by filling out our no-obligation entertainment request form to check pricing and availability for Chicago or whoever else you may want.

Our Chicago agent will be happy to help you get Chicago's availability and booking fee, or the price and availability for any other A-List entertainer, band, comedian or celebrity you may want for your corporate event, private party, wedding, birthday party or public show.

The band Chicago, second only to the Beach Boys as the most successful American rock band of all time, has roots which go back to their days at DePaul University, where a group of students began performing at clubs and late-night jams around campus. Back then, the band which would become Chicago featured trumpet player Lee Loughnane, saxophonist Walter Parazaider, guitarist Terry Kath, trombonist James Pankow, drummer Danny Seraphine ,and keyboardist Robert Lamm.  Bassist Peter Cetera would join the group last.

Under the name The Chicago Transit Authority (which would later be changed when the real transit authority threatened suit), Chicago released their debut album in 1969. The work was quite an endeavor; it’s extended jams, complex guitar stylings, and jazz infusions resulted in the singles “Does Anybody Really Know What Time It Is?", "Questions 67 and 68,” and "Beginnings", not to mention lots of heavy airplay. Their second album, known as Chicago II, became the band’s breakthrough album with "Color My World" and “Make Me Smile.”  Through the 1970’s, Chicago released albums at a rate of more than two per year, until 1981 when they jump-started their next career phase with a new Warner Brothers contract, producer David Foster, and new band members Bill Champlin and Chris Pinnick.

Chicago quickly returned to the top of the charts with “Love Me Tomorrow” and “Hard to Say I’m Sorry/Get Away,” from their album Chicago 16. The album which followed, Chicago 17, became the group’s crowning achievement, with the singles “Hard Habit to Break” and “You’re the Inspiration.” They topped the charts again, in 1988 with “Look Away,” off their Chicago 19 album.

Today, with over twenty-two gold albums, eighteen platinum albums, eight multi-platinum albums, twenty-one top ten singles, and five number-one albums, Chicago is one of the most successful American bands of all-time. The group continues to write, record, and tour well into the new millennium; Chicago’s most recent release, Chicago at Symphony Hall, arrived in 2015, and one year later, Chicago was inducted into the Rock and Roll Hall of Fame.

In 2017, the CNN network aired a two-hour documentary on the group, titled Now More Than Ever: The History of Chicago. The documentary was among their most-watched so far in the network’s history.

For more information on booking Chicago, please contact Booking Entertainment. One of our top booking agents will be happy to work on your behalf to get you the best possible price to book any big name entertainer for your upcoming public, private or corporate event worldwide.

Booking Entertainment works to get the best possible Chicago booking fee and Chicago price for our clients while also providing the celebrity or famous entertainer with the level of professionalism and industry norms that they expect from an event run by a professional booking agency and production management.

Booking Entertainment uses our agency / management relationships and over 25 years of production experience to help buyers of headline / top name entertainers and does not claim or represent itself as the exclusive Chicago agent, manager or management company for any of the artists on our site.

Booking Entertainment does not claim or represent itself as the exclusive booking agency, business manager, publicist, speakers bureau or management for Chicago or any artists or celebrities on this website.