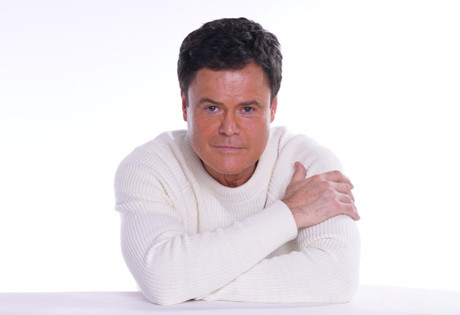 Start by filling out our no-obligation entertainment request form to check pricing and availability for Donny Osmond or whoever else you may want.

Our Donny Osmond agent will be happy to help you get Donny Osmond's availability and booking fee, or the price and availability for any other A-List entertainer, band, comedian or celebrity you may want for your corporate event, private party, wedding, birthday party or public show.

Performer Donny Osmond burst onto the music scene as a young child, performing alongside his brothers. The Osmonds, as they were called, appeared frequently on The Andy Williams Show, and enjoyed fairly popular “teenybopper” status in the 1970’s, with a string of hits. During those years, the group also toured constantly, selling over eighty million records within one year, and turning themselves one of the most successful groups of the decade. Donny & Marie was also an incredibly popular television show which aired between 1976 and 1979.

After the Osmonds disbanded, Donny Osmond enjoyed a few solo hits in the 70s as well, including “Sweet and Innocent,” “Go Away Little Girl,” “Puppy Love,” and “Hey Girl/I Knew You When.” But it wasn’t until 1989 that Donny Osmond would truly attempt to strike out on his own with Donny Osmond, his solo debut album. Singles like “I’m in It for Love,” “Soldier of Love,” and “Sacred Emotion” brought him to the forefront again, and he also enjoyed moderate success with Eyes Don’t Lie in 1990.

Donny Osmond spent the decade of the 90’s largely on stage, including a five-year run in Joseph and the Amazing Technicolor Dreamcoat. At the end of the decade, he launched a talk show, co-hosted with his sister Marie, and subsequent albums followed in the first decade of the new millennium: This is the Moment (2001), Somewhere in Time (2002), What I Meant to Say (2005), and Love Songs of the 70s (2007.)

In 2008, Donny and Marie Osmond began their enormously successful show at the MGM Grand Las Vegas. The show went on to be one of the most popular on the strip and resulted into two extensions of what had meant to be a six-month run. It also earned the duo three Best of Las Vegas Awards, including Best All-Around Performer, Best Singer, and Best Show. The show lasted through 2016.

Today, Donny Osmond continues to contribute to the world of entertainment as a singer, songwriter, actor, and performer. He recently released the album The Soundtrack of My Life, in 2014.

For more information on booking Donny Osmond, please contact Booking Entertainment. One of our top booking agents will be happy to work on your behalf to get you the best possible price to book any big name entertainer for your upcoming public, private or corporate event worldwide.

Booking Entertainment works to get the best possible Donny Osmond booking fee and Donny Osmond price for our clients while also providing the celebrity or famous entertainer with the level of professionalism and industry norms that they expect from an event run by a professional booking agency and production management.

Booking Entertainment uses our agency / management relationships and over 25 years of production experience to help buyers of headline / top name entertainers and does not claim or represent itself as the exclusive Donny Osmond agent, manager or management company for any of the artists on our site.

Booking Entertainment does not claim or represent itself as the exclusive booking agency, business manager, publicist, speakers bureau or management for Donny Osmond or any artists or celebrities on this website.