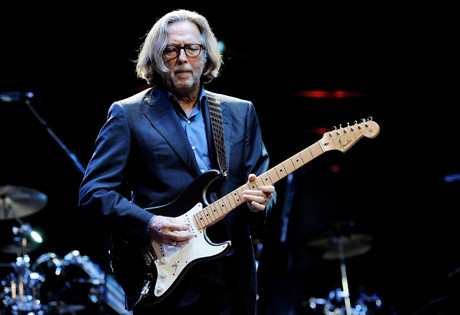 Start by filling out our no-obligation entertainment request form to check pricing and availability for Eric Clapton or whoever else you may want.

Our Eric Clapton agent will be happy to help you get Eric Clapton's availability and booking fee, or the price and availability for any other A-List entertainer, band, comedian or celebrity you may want for your corporate event, private party, wedding, birthday party or public show.

Legendary musician Eric Clapton was born in 1945 in Ripley, Surrey, England. Young Eric was given an acoustic guitar for a birthday as a teenager, and he immediately fell in love with the instrument. Clapton spent his early years influenced by some of the most iconic blues performers in music – Howlin’ Wolf, Son House, and Robert Johnson. Immediately upon joining the Yardbirds, he established himself with a unique style, one he carried into his time with John Mayall & the Bluesbreakers.

In the mid 1960’s, Eric Clapton formed Cream with Ginger Baker and Jack Bruce. With hit singles like “White Room” and “Sunshine of Your Love,” his popularity as a distinctive guitarist outlived the band’s existence, and by the time they’d released their final album in 1968, Eric Clapton was ready to move on. After joining Blind Faith in 1969, and then releasing Eric Clapton in 1970, he disappeared into the background, occasionally performing with other bands collaboratively, before resurfacing in 1974 with 461 Ocean Boulevard. The album featured his now-famous cover of Bob Marley’s “I Shot the Sheriff.” A string of successful albums continued throughout the rest of the 1970’s and 1980’s, including There’s One in Every Crowd (1975), No Reason to Cry (1976), Slowhand (1977), Backless (1978), Another Ticket (1981), Money and Cigarettes (1983), Behind the Sun (1985), August (1986), and Journeyman (1989.)

Today, now well into his seventies, Eric Clapton continues to perform and record. He performed multiple shows at Madison Square Garden in 2015, followed immediately by seven shows at London’s Royal Albert Hall. Clapton’s most recent studio album, I Still Do, arrived in 2016. Later in the year, he released the live album Live in San Diego.

For more information on booking Eric Clapton, please contact Booking Entertainment. One of our top booking agents will be happy to work on your behalf to get you the best possible price to book any big name entertainer for your upcoming public, private or corporate event worldwide.

Booking Entertainment works to get the best possible Eric Clapton booking fee and Eric Clapton price for our clients while also providing the celebrity or famous entertainer with the level of professionalism and industry norms that they expect from an event run by a professional booking agency and production management.

Booking Entertainment uses our agency / management relationships and over 25 years of production experience to help buyers of headline / top name entertainers and does not claim or represent itself as the exclusive Eric Clapton agent, manager or management company for any of the artists on our site.

Booking Entertainment does not claim or represent itself as the exclusive booking agency, business manager, publicist, speakers bureau or management for Eric Clapton or any artists or celebrities on this website.