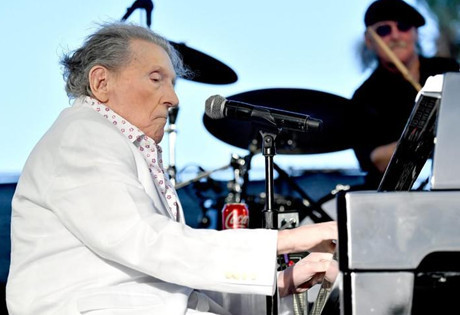 Start by filling out our no-obligation entertainment request form to check pricing and availability for Jerry Lee Lewis or whoever else you may want.

Our Jerry Lee Lewis agent will be happy to help you get Jerry Lee Lewis 's availability and booking fee, or the price and availability for any other A-List entertainer, band, comedian or celebrity you may want for your corporate event, private party, wedding, birthday party or public show.

Jerry Lee Lewis was born into a poverty-stricken, rural area of Louisiana in 1935. He started playing piano while still a child, and surprised his parents when his performing preferences shifted from evangelical music to boogie woogie. Despite the local community’s concern that Jerry Lee had turned to the “devil’s music,” Lewis continued to play in clubs around Louisiana and Mississippi, embracing the new rock ’n’ roll sound that was sweeping the country.

In 1954, Jerry Lee Lewis recorded his first demo, and in the following year, he moved to Nashville to play some of the local clubs there. After encountering some frustrating rejections, Jerry Lee went to Memphis in 1956 to record a version of “Crazy Arms” and “End of the Road” for the purpose of a Sun Records audition, and subsequently he began working for the label as a session musician, playing with the likes of Johnny Cash and Carl Perkins, who were already on the label.

In 1957, Jerry Lee Lewis’s own singles, such as “Great Balls of Fire” and “Whole Lotta Shakin’ Goin’ On,” began to receive attention from music industry professionals and listeners alike. Jerry Lee’s intense performances, which often included kicking away the piano bench and standing on top of the piano, began to attract plenty of interest, and his career began to take off. Between 1957 and 2006, Jerry Lee Lewis had twenty-two albums and forty-seven hit singles, fourteen of which reached the number one position on the charts. His five-decade long career has brought American music some of its most iconic hits, and Jerry Lee Lewis was honored as one of the earliest inductees into the Rock and Roll Hall of Fame.

Jerry Lee Lewis did not exit the music scene suddenly or quietly, however. In 1998, he toured with Little Richard and Chuck Berry in Europe, and he released Last Man Standing well into the new millennium, in 2006. The release spawned a DVD by the same title, with live concert footage, was equally successful. In 2008, Lewis appeared at the Grammy Awards, performing “Good Golly Miss Molly” and “Great Balls of Fire” alongside Little Richard and John Fogerty, and in the summer of that year he appeared on A Capital Fourth to perform similar medleys and hits. A European tour followed, and in 2009 Jerry Lee Lewis performed at Madison Square Garden in New York for the Rock and Roll Hall of Fame 25th Anniversary Concert.

Jerry Lee Lewis stands as one of the Top Fifty all-time country artists, and he’s still going strong. Mean Old Men, his most recent album release, arrived in 2010 and he has plans to continue to record, perform, and tour.

For more information on booking Jerry Lee Lewis , please contact Booking Entertainment. One of our top booking agents will be happy to work on your behalf to get you the best possible price to book any big name entertainer for your upcoming public, private or corporate event worldwide.

Booking Entertainment works to get the best possible Jerry Lee Lewis booking fee and Jerry Lee Lewis price for our clients while also providing the celebrity or famous entertainer with the level of professionalism and industry norms that they expect from an event run by a professional booking agency and production management.

Booking Entertainment uses our agency / management relationships and over 25 years of production experience to help buyers of headline / top name entertainers and does not claim or represent itself as the exclusive Jerry Lee Lewis agent, manager or management company for any of the artists on our site.

Booking Entertainment does not claim or represent itself as the exclusive booking agency, business manager, publicist, speakers bureau or management for Jerry Lee Lewis or any artists or celebrities on this website.