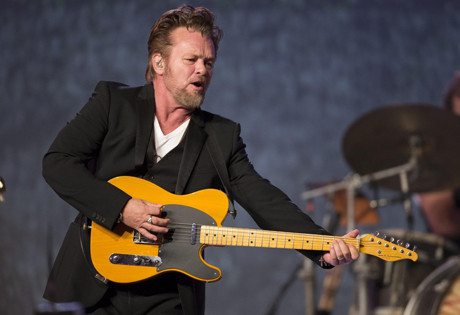 Start by filling out our no-obligation entertainment request form to check pricing and availability for John Mellencamp or whoever else you may want.

Our John Mellencamp agent will be happy to help you get John Mellencamp's availability and booking fee, or the price and availability for any other A-List entertainer, band, comedian or celebrity you may want for your corporate event, private party, wedding, birthday party or public show.

Many years ago, John Mellencamp, on the advise of industry experts, took the name “Johnny Cougar” as a more appealing-sounding moniker to launch a music career. It wouldn’t be long before it was no longer needed.

John Mellencamp’s breakthrough 1982 album, American Fool, rocketed to success on the strength of the singles “Jack and Diane” and “Hurt so Good.” With a hit comfortably sitting at the top of the charts, Mellencamp insisted on modifying his billing to John Cougar Mellencamp for his 1983 follow-up, Uh-Huh.  With another top ten hit, " Pink Houses"  he returned to his given name of John Mellencamp for his songwriting and production credits, even though John Cougar Mellencamp would still appear on album covers for another few years.

Scarecrow, an album with a number of songs to increase awareness for the struggle of the American family farmer, was released in 1985, and soon after John Mellencamp assisted Wilile Nelson in the foundation of Farm Aid. With "Small Town", "Lonely Ol' Night", and "R.O.C.K. in the U.S.A." all becoming Top 10 hits, Scarecrow quickly became iconic for Heartland Rock.

The Lonesome Jubilee, in 1987, brought John Mellencamp several more hits, including “Cherry Bomb” and “Paper in Fire.” 1991’s Whenever We Wanted finally billed the artist as John Mellencamp, and yielded the hit “Get a Leg up.”

Later that same year, John Mellencamp toured New Zealand and Australia with Sheryl Crow, and in 2009, he launched a tour of minor league ballparks, accompanied by Willie Nelson and Bob Dylan. While on that tour, Mellencamp again produced an album with T. Bone Burnett, and No Better Than This peaked at number ten on the charts, becoming the 10th Top Ten album of John Mellencamp’s career.

In addition to his achievements in music, John Mellencamp has appeared in a number of films, including After Image and Falling from Grace. He has sold more than 25 million albums in the United States alone, and far more worldwide.

For more information on booking John Mellencamp, please contact Booking Entertainment. One of our top booking agents will be happy to work on your behalf to get you the best possible price to book any big name entertainer for your upcoming public, private or corporate event worldwide.

Booking Entertainment works to get the best possible John Mellencamp booking fee and John Mellencamp price for our clients while also providing the celebrity or famous entertainer with the level of professionalism and industry norms that they expect from an event run by a professional booking agency and production management.

Booking Entertainment uses our agency / management relationships and over 25 years of production experience to help buyers of headline / top name entertainers and does not claim or represent itself as the exclusive John Mellencamp agent, manager or management company for any of the artists on our site.

Booking Entertainment does not claim or represent itself as the exclusive booking agency, business manager, publicist, speakers bureau or management for John Mellencamp or any artists or celebrities on this website.