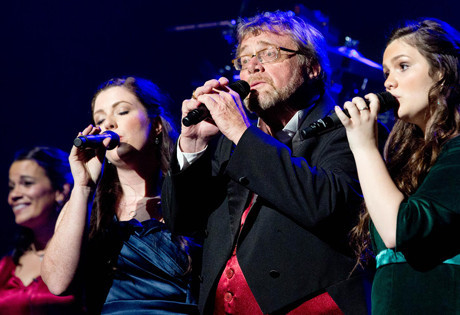 Start by filling out our no-obligation entertainment request form to check pricing and availability for Mannheim Steamroller or whoever else you may want.

Chip Davis, the group’s founder, was born in Ohio to a musical family. His mother was a trombonist and his father was a high school music educator, and it was Chip’s grandmother who gave him his first piano lessons at the age of four. Davis went on to join the boys’ choir and to later attend the University of Michigan. He joined the Norman Luboff Choir after graduating in 1969, but after a few years working with them, he opted instead to teach music in public schools. Following his teaching job, he served as arranger for a Nebraska production of Hair, and then after that opted for a job writing jingles for ads.

Around the same time, Davis began recording synthesized rock versions of some classical and traditional pieces, and eventually created what would become his debut album, Fresh Aire. In 1974, he founded American Gramaphone to release the album, and simultaneously created Mannheim Steamroller to give it greater credibility.

Mannheim Steamroller’s Fresh Aire was largely promoted and marketed alongside stores selling state-of-the-art home stereos and sounds, and inadvertently the album became a huge hit. A series of Fresh Aires followed, until 1984, when Mannheim Steamroller Christmas was released, with its iconic version of “Deck the Halls.” ?A Fresh Aire Christmas followed four years later to equal success.

In recent years, Mannheim Steamroller has appeared as part of the Macy’s Thanksgiving Day Parade performances, delighting audiences with their hit version of “Deck the Halls.” Thus far, Mannheim Steamroller has gone on to sell more than twenty-eight million albums in the United States, and continues to delight fans each season with broadcasts, performances, and new material.

For more information on booking Mannheim Steamroller, please contact Booking Entertainment. One of our top booking agents will be happy to work on your behalf to get you the best possible price to book any big name entertainer for your upcoming public, private or corporate event worldwide.

Booking Entertainment uses our agency / management relationships and over 25 years of production experience to help buyers of headline / top name entertainers and does not claim or represent itself as the exclusive Mannheim Steamroller agent, manager or management company for any of the artists on our site.

Booking Entertainment does not claim or represent itself as the exclusive booking agency, business manager, publicist, speakers bureau or management for Mannheim Steamroller or any artists or celebrities on this website.