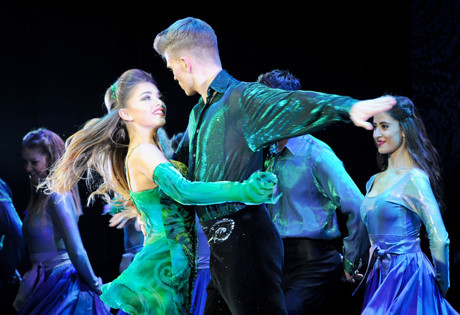 Start by filling out our no-obligation entertainment request form to check pricing and availability for Riverdance or whoever else you may want.

Our Riverdance agent will be happy to help you get Riverdance's availability and booking fee, or the price and availability for any other A-List entertainer, band, comedian or celebrity you may want for your corporate event, private party, wedding, birthday party or public show.

Riverdance became a smash hit theatrical show in the mid 1990’s, when it originated as a short interval piece included in the 1994 Eurovision Song Contest. The performance, which is a modern rendition of traditional Irish stepdancing, enamored and delighted audiences from the very start, and continues to do so today.

Featuring dancers Jean Butler and Michael Flatley, accompanied by Anuna, the Celtic choral group, and the RTE Concert Orchestra, Riverdance brought down the house with a standing ovation at the Eurovision Song Contest in Dublin. The BBC then commissioned another performance for its Royal Variety Show in the same year. The show’s recording hit the charts in the same year, and stayed there for the summer of 1994, for a record total of eighteen weeks at number one. The show’s full-length performance opened in the following year, enjoying a
five-week run with consistent sell-out ticket sales and featuring Michael Flatley.

Riverdance came to the United States in March of 1996, with an eight-week sell out performance at Radio City Music Hall. Additional sell-out performances followed in Belfast, Cork, and the Hammersmith. The original season had expected to end in 1996, but was extended to 1997, and included a total of 400 shows to more than 1.3 million people. In 2000, Riverdance came to Broadway and the Gershwin Theater hosted a new version of the show, with the addition of singers and new dance leaders.

Michael Flatley eventually left the show, purportedly over creative differences, and was replaced by Colin Dunne, and then by Joseph Moriarty, who remained with the show until 2011. After fifteen years of performances, Riverdance launched a final tour, with stops in Ipswich, Southend-on-Sea, Bradford, Blackpool, Bristol, London, Manchester, Oxford, Southampton, Nottingham Australia, and Israel. Riverdance continues to perform, but with reduced productions and usually in smaller venues.

Riverdance continues to delight fans and audiences around the world, but with reduced productions and usually in smaller venues. It’s legacy is unquestionably enduring; in 2013, more than 1500 dancers from nearly fifty countries performed Riverdance on a bridge overlooking the River Liffey, in Ireland.

For more information on booking Riverdance, please contact Booking Entertainment. One of our top booking agents will be happy to work on your behalf to get you the best possible price to book any big name entertainer for your upcoming public, private or corporate event worldwide.

Booking Entertainment works to get the best possible Riverdance booking fee and Riverdance price for our clients while also providing the celebrity or famous entertainer with the level of professionalism and industry norms that they expect from an event run by a professional booking agency and production management.

Booking Entertainment uses our agency / management relationships and over 25 years of production experience to help buyers of headline / top name entertainers and does not claim or represent itself as the exclusive Riverdance agent, manager or management company for any of the artists on our site.

Booking Entertainment does not claim or represent itself as the exclusive booking agency, business manager, publicist, speakers bureau or management for Riverdance or any artists or celebrities on this website.