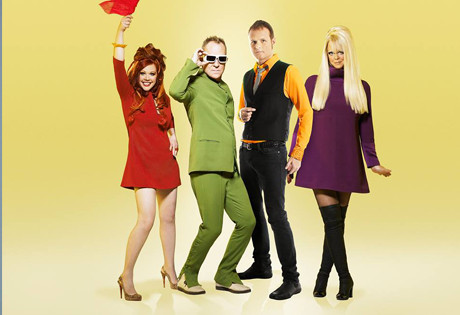 Start by filling out our no-obligation entertainment request form to check pricing and availability for The B-52's or whoever else you may want.

Our The B-52's agent will be happy to help you get The B-52's 's availability and booking fee, or the price and availability for any other A-List entertainer, band, comedian or celebrity you may want for your corporate event, private party, wedding, birthday party or public show.

The B-52’s have not only enjoyed sales exceeding twenty million albums over their thirty years in the business, but they are recognized worldwide for their unusual presence and unique sound. The group was established by founding members Keith Strickland, Cindy Wilson, Fred Schneider, Kate Pierson, and Ricky Wilson in the late 1970’s. The group’s self-titled debut arrived in 1979, and on the strength of the single “Rock Lobster,” was a hit in Canada and Australia.

But it was the album Cosmic Thing, released in 1989, that truly brought the B-52’s their big breakthrough, rising into the top five in the United States and into the top ten internationally. The album spawned the hit single “Love Shack,” and set the stage for a career which has since made the B-52’s an iconic pop group which has enjoyed enduring popularity well into the new millennium. Additional notable singles from the B-52’s include “Roam,” “Planet Claire,” “Private Idaho,” “Deadbeat Club,” and “Good Stuff.”

The B-52’s resurfaced in the new millennium with the album Funplex in 2008, bringing their unique sound to a whole new generation. The album debuted at number eleven on the charts and was supported by appearances on The Today Show, The Ellen DeGeneres Show, and The Tonight Show. The group also participated with Cyndi Lauper in the True Colors Tour of 2008, just before embarking on their own European tour shortly thereafter.

The B-52s performed as the house band in April of 2012, during the 2012 TV Land Awards, delighting audiences with "Love Shack,” “Rock Lobster,” and "Roam.” The group continues to perform around fifty shows every year, and in recent years has performed on tour as a solo-act, and also in partnership with groups such as The Go-Go’s, Tears for Fears, Simple Minds, and The Psychedelic Furs. Most recently, in 2017 the B-52’s were featured on RuPaul’s Drag Race for the show’s ninth season.

Hiring The B-52's For Corporate Events, Private Parties And Public Concerts Is Easy With Booking Entertainment

For more information on booking The B-52's , please contact Booking Entertainment. One of our top booking agents will be happy to work on your behalf to get you the best possible price to book any big name entertainer for your upcoming public, private or corporate event worldwide.

Booking Entertainment works to get the best possible The B-52's booking fee and The B-52's price for our clients while also providing the celebrity or famous entertainer with the level of professionalism and industry norms that they expect from an event run by a professional booking agency and production management.

Booking Entertainment uses our agency / management relationships and over 25 years of production experience to help buyers of headline / top name entertainers and does not claim or represent itself as the exclusive The B-52's agent, manager or management company for any of the artists on our site.

Booking Entertainment does not claim or represent itself as the exclusive booking agency, business manager, publicist, speakers bureau or management for The B-52's or any artists or celebrities on this website.