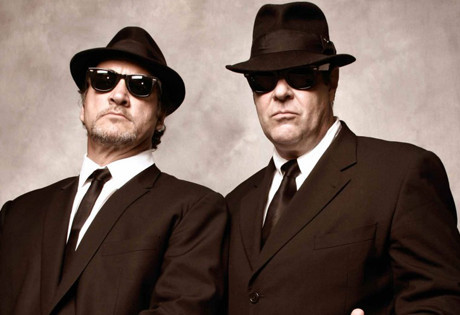 Start by filling out our no-obligation entertainment request form to check pricing and availability for The Blues Brothers or whoever else you may want.

The Blues Brothers, also known as The Blues Brothers' Show Band and Revue, were founded in 1978 by John Belushi and Dan Aykroyd. Initially a Saturday Night Live musical sketch, John and Dan's love of the blues inspired them to take the concept one step further. John Belushi was born in Chicago and had his first break in 1971, when he joined a comedy troupe in his hometown. Eventually, he was cast in National Lampoon's Lemmings, playing off-Broadway, with Chevy Chase and Christopher Guest, which would lead to his Saturday Night Live connection.

Dan Aykroyd was born in Canada, and worked in a variety of nightclubs in the country before gaining fame on Saturday Night Live, where he was both a writer and performer from 1975 to 1979.

Dan Aykroyd and John Belushi became close friends right away, and it was Aykroyd who sparked Belushi's interest in blues. The common interest that developed would become the impetus for The Blues Brothers, which would become a regular Saturday Night Live skit.

Belushi took on the role of "Joliet," the lead vocalist and Aykroyd transformed into Elwood Blues, the harmonica player and back-up vocalist for the band. Their assembly of talented musicians to join them in forming what would become The Blues Brothers was in part aided by Paul Shaffer, pulling from the talents of the Saturday Night Live band. Lou Marini on sax, Steve Cropper and Matt Murphy on guitar, Tom Malone on trombone, Donald Dunn on bass, and Alan Rubin on trumpet eventually rounded out the band.

Briefcase Full of Blues, the Blues Brothers first album, was released in 1978, and that same year the band performed as the special musical guest on Saturday Night Live. The film The Blues Brothers followed in 1980, and the band appeared to have taken on a life of its own, with its own strong following beyond the Saturday Night Live audience alone.

Then, in 1982, John Belushi died suddenly of an accidental drug overdose, and the future of the band seemed in question. But the Blues Brothers has survived, utilizing guest singers and rotating band members, and even reformed in 1998 for a world tour. The tour was followed by Blues Brothers 2000, a sequel to the original film.

That year, to help promote the film, Dan Aykroyd and John Belushi's brother Jim Belushi appeared at the halftime show for Super Bowl XXXI, along with James Brown, John Goodman, and ZZ Top. The musical The Blues Brothers Revival followed in 2004, premiering in Chicago, and featuring a storyline where Elwood attempts to rescue Jake from limbo/purgatory.

For more information on booking The Blues Brothers, please contact Booking Entertainment. One of our top booking agents will be happy to work on your behalf to get you the best possible price to book any big name entertainer for your upcoming public, private or corporate event worldwide.

Booking Entertainment works to get the best possible The Blues Brothers booking fee and The Blues Brothers price for our clients while also providing the celebrity or famous entertainer with the level of professionalism and industry norms that they expect from an event run by a professional booking agency and production management.

Booking Entertainment uses our agency / management relationships and over 25 years of production experience to help buyers of headline / top name entertainers and does not claim or represent itself as the exclusive The Blues Brothers agent, manager or management company for any of the artists on our site.

Booking Entertainment does not claim or represent itself as the exclusive booking agency, business manager, publicist, speakers bureau or management for The Blues Brothers or any artists or celebrities on this website.