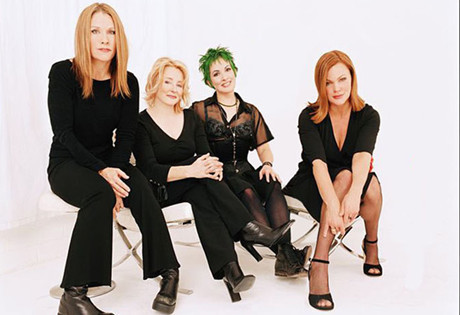 Start by filling out our no-obligation entertainment request form to check pricing and availability for The Go-Go's or whoever else you may want.

Our The Go-Go's agent will be happy to help you get The Go-Go's's availability and booking fee, or the price and availability for any other A-List entertainer, band, comedian or celebrity you may want for your corporate event, private party, wedding, birthday party or public show.

The Go-Go’s came together in 1978, when members Belinda Carlisle, Elissa Bello, Margot Olavarria, and Jane Wiedlin formed a punk band and began performing around the Los Angeles club scene. Shortly after their inception, Bello left the group and was replaced by Gina Schock, Olavarria was replaced with Kathy Valentine, and Charlotte Caffey was added for guitar and keyboards, bringing the Go-Go’s to the lineup that would carry them through their greatest period of success and give them a more pop-oriented sound.

The Go-Go’s exploded onto the music scene in the early 1980’s, with the album Beauty and the Beat (1981) and a string of hit singles, such as “Head Over Heels,” “Our Lips are Sealed,” and the iconic “We Got the Beat.” The album Vacation hit the Top Ten and went gold, and Talk Show followed in 1984. The Go-Go’s disbanded shortly thereafter, although Belinda Carlisle would go on to enjoy a successful solo career. The girls reunited briefly in 1990, to perform at a benefit for the non-profit organization PETA, and then once again in 1994 to record new material for Return of the Valley of the Go-Go’s, a compilation album.

Each of the members of the Go-Go’s has gone on to enjoy a successful career as a solo artist in a variety of capacities. Belinda Carlisle enjoyed a string of hit singles in the 1980’s, including “Heaven is a Place on Earth” and “Mad About You.” She penned the book Lips Unsealed, a memoir which documents her experience as a member of the Go-Go’s, in 2010. Charlotte Caffey enjoyed work as a session musician and songwriter before forming The Graces in 1988 and releasing the album Perfect View. Jane Wiedlin released a number of solo albums and began an acting career, appearing in Bill and Ted’s Excellent Adventure and Star Trek IV: The Voyage Home. She began her own record label, Painful Discs, in 2000. Gina Schock also released a series of solo albums with her band house of Schock, and co-wrote material for Miley Cyrus and Selena Gomez. Kathy Valentine joined the Delphines and also released a solo album, Light Years, in 2005.

The Go-Go’s reunited once again at the dawn of the new millennium, to record material for God Bless the Go-Go’s. The single “Unforgiven” reached into the Top 40, and the album itself hit the Billboard 200. In 2001, the Go-Go’s also performed at the All Star Tribute to Brian Wilson at Radio City Music Hall, and the group recently resumed touring to celebrate the anniversary of Beauty and the Beat, released thirty years ago.

Today, the Go-Go’s continue to perform and record together, although sporadically. A series of performances in 2016 were billed as part of their “farewell” tour prior to retirement, but since that time they have appeared in performance on more than on occasion. The most recent appearance was in the spring of 2017, for a performance on Jimmy Kimmel Live!

Hiring The Go-Go's For Corporate Events, Private Parties And Public Concerts Is Easy With Booking Entertainment

For more information on booking The Go-Go's, please contact Booking Entertainment. One of our top booking agents will be happy to work on your behalf to get you the best possible price to book any big name entertainer for your upcoming public, private or corporate event worldwide.

Booking Entertainment works to get the best possible The Go-Go's booking fee and The Go-Go's price for our clients while also providing the celebrity or famous entertainer with the level of professionalism and industry norms that they expect from an event run by a professional booking agency and production management.

Booking Entertainment uses our agency / management relationships and over 25 years of production experience to help buyers of headline / top name entertainers and does not claim or represent itself as the exclusive The Go-Go's agent, manager or management company for any of the artists on our site.

Booking Entertainment does not claim or represent itself as the exclusive booking agency, business manager, publicist, speakers bureau or management for The Go-Go's or any artists or celebrities on this website.