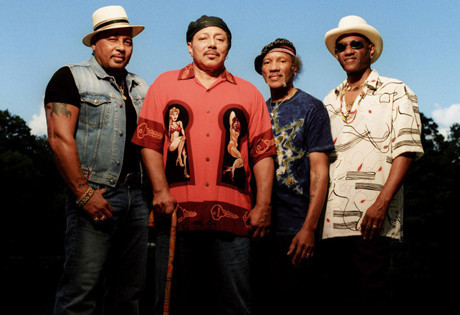 Start by filling out our no-obligation entertainment request form to check pricing and availability for The Neville Brothers or whoever else you may want.

The Neville Brothers’ story begins in the '70s, when the four brothers, along with Paul Howrilla, created Neville Productions, Inc., after recording The Wild Tchoupitoulas, a recording of Indian chants and songs, with their Uncle Jolly. The Neville Brothers began performing to packed crowds at their Uptown neighborhood club, Tipitina’s, and were soon quitting their day jobs to play music together as The Neville Brothers full-time.

The Neville Brothers’ 1978 debut, The Neville Brothers, featured their intricate four-part harmonies on songs like “Arianne” and “Audience for My Pain.” Fiyo on the Bayou hit in 1981 and spotlighted Aaron Neville's tenor on tunes like "Mona Lisa" and "The Ten Commandments of Love" along with renditions of "Iko Iko" and "Brother John." The Neville Brothers then issued 1984's Neville-ization, a live set from their old stomping grounds, the Crescent City landmark Tipitina's. Live at Tipitina's was released in 1987, as was the studio album Uptown, that featured Keith Richards, Jerry Garcia, and Carlos Santana. In 1989, the Neville Brothers released A&M Records’ Yellow Moon, earning them a Grammy for Best Pop Instrumental Performance (for “Healing Chant.”) Brother's Keeper followed in 1990, and Family Groove in 1992, which featured the single “Bird on a Wire,” featured in the Goldie Hawn film of the same name.

The Neville Brothers took a hiatus from the public eye due to Art’s health issues in the late 1990’s and early 2000’s, but returned in 2004 with their comeback album Walkin’ in the Shadow of Life. Following Hurricane Katrina in 2005, The Neville Brothers wouldn’t return to play there until 2008, where they performed in the closing spot at the New Orleans Jazz & Heritage Festival. The Neville Brothers continue to perform together and appear in a November 2012 episode of HBO’s original series Treme, performing at the 2008 Washington DC Mardi Gras Ball.

Although the Neville Brothers formally disbanded in 2012, they did reunite in 2015 for a sold-out concert in their hometown of New Orleans. Although they rarely perform as a group these days, Aaron Neville remains an active performer; in recent years he has released the album My True Story, featuring doo-wop tunes. Cyril Neville spent the last few years performing with Devon Allman and other notable musicians in the supergroup Royal Southern Brotherhood. Ivan Neville frequently performs with them as well.

For more information on booking The Neville Brothers, please contact Booking Entertainment. One of our top booking agents will be happy to work on your behalf to get you the best possible price to book any big name entertainer for your upcoming public, private or corporate event worldwide.

Booking Entertainment uses our agency / management relationships and over 25 years of production experience to help buyers of headline / top name entertainers and does not claim or represent itself as the exclusive The Neville Brothers agent, manager or management company for any of the artists on our site.

Booking Entertainment does not claim or represent itself as the exclusive booking agency, business manager, publicist, speakers bureau or management for The Neville Brothers or any artists or celebrities on this website.