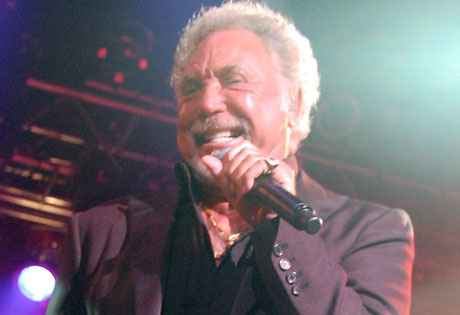 Start by filling out our no-obligation entertainment request form to check pricing and availability for Tom Jones or whoever else you may want.

Our Tom Jones agent will be happy to help you get Tom Jones 's availability and booking fee, or the price and availability for any other A-List entertainer, band, comedian or celebrity you may want for your corporate event, private party, wedding, birthday party or public show.

Tom Jones began singing in 1963, performing with a Welsh beat group and later recording a series of solo demos which were initially received with moderate interest. But it would be former Viscounts singer Gordon Mills, an artist manager, who would discover Tom Jones’ talents and launch his career.

“Chills and Fever” was released in 1964 to lukewarm response, but "It's Not Unusual” would explode in the year after, becoming a Top Ten hit in the United States. A series of hits followed, including "Once Upon a Time," "Little Lonely One," and "With These Hands." Around the same time, Tom Jones also began recording a series of film themes, including "What's New Pussycat?" (June 1965) and "Thunderball" (December 1965).

For the remainder of the 1960’s, Tom Jones enjoyed steady success in both the United States and in the UK, in a variety of media outlets. This is Tom Jones, a variety program, launched on American television in 1969. The show lasted until 1971 but was such an extraordinary success it established the Las Vegas move Tom Jones would take in the early 1970’s. In the decades following, Tom Jones would also enjoy other avenues for his performances and recordings. In 1993, Jones performed at the Glastonbury Festival in England, and in 1994 he released the dance-pop album The Lead and How to Swing It. In 2005 he completed a live recording for the album Together In Concert, with John Farnham and his band.

Since 2006, Tom Jones has been performing in Las Vegas and in other concert venues internationally. Between 2010 and 2015, he released three new albums—Praise & Blame (2010), Spirit in the Room (2012), and Long Lost Suitcase (2016.) He also published his autobiography, titled Over the Top and Back, in 2015. Tom Jones has a star on the Hollywood Walk of Fame, and he was recognized by Queen Elizabeth with a knighthood in 2006.

For more information on booking Tom Jones , please contact Booking Entertainment. One of our top booking agents will be happy to work on your behalf to get you the best possible price to book any big name entertainer for your upcoming public, private or corporate event worldwide.

Booking Entertainment works to get the best possible Tom Jones booking fee and Tom Jones price for our clients while also providing the celebrity or famous entertainer with the level of professionalism and industry norms that they expect from an event run by a professional booking agency and production management.

Booking Entertainment uses our agency / management relationships and over 25 years of production experience to help buyers of headline / top name entertainers and does not claim or represent itself as the exclusive Tom Jones agent, manager or management company for any of the artists on our site.

Booking Entertainment does not claim or represent itself as the exclusive booking agency, business manager, publicist, speakers bureau or management for Tom Jones or any artists or celebrities on this website.