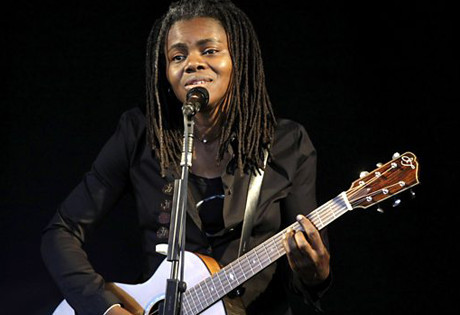 Start by filling out our no-obligation entertainment request form to check pricing and availability for Tracy Chapman or whoever else you may want.

Our Tracy Chapman agent will be happy to help you get Tracy Chapman's availability and booking fee, or the price and availability for any other A-List entertainer, band, comedian or celebrity you may want for your corporate event, private party, wedding, birthday party or public show.

Tracy Chapman was born in 1964 in Cleveland, Ohio. As a child, she exhibited a talent for music, and although her working-class family did not have money to spare, her mother bought her a ukelele when she was only three years old. Tracy progressed to the guitar, and by the age of ten she was writing her own songs.

During her studies at Tufts University, Tracy Chapman began performing around town at local coffeehouses. A lucky friendship with one her classmates, whose father happened to be the head of a music publishing company, led to her breakthrough. After hearing her demo, SBK Publishing signed her in 1986 and Tracy Chapman secured a management contract. Her debut album, Tracy Chapman, was released in 1988, to strong reviews, and she further supported the album by opening for 10,000 Maniacs on tour. On the strength of the hit “Fast Car,” the album rose to the top of the charts, and by the end of the year Tracy Chapman had a multi-platinum debut and four Grammys, including one for Best New Artist.

The next two decades brought a string of albums from Tracy Chapman: Crossroads (1989), Matters of the Heart (1992), New Beginning (1995), Telling Stories (2000), and Let it Rain (2002.) Chapman earned additional Grammy nominations for the albums Crossroads and New Beginnings, and “Give Me One Reason,” earned her three nominations and a win for Best Rock Song. Chapman’s seventh studio album, Where You Live, was released in 2005, and Tracy began a worldwide tour in support of it, taking her through Europe and the United States. Our Bright Future followed in 2008, also with an accompanying tour. The album earned Chapman another Grammy nomination, this time for Best Contemporary Folk Album.

In addition to her contributions in the area of music, Tracy Chapman is a socially active woman who supports a variety of charities and altruistic endeavors. Her music reflects her strong political and humanitarian worldview, as evidenced in the single “Talkin’ Bout a Revolution.” She continues to use music as her medium for expression, and to delight fans around the world with her performances. Chapman continues to perform on occasion; she recently performed her version of King’s classic song, “Stand By Me,” for David Letterman’s final episode of the Late Show with David Letterman in 2015. Later that year, she released her first compilation album, aptly titled simply Greatest Hits.

For more information on booking Tracy Chapman, please contact Booking Entertainment. One of our top booking agents will be happy to work on your behalf to get you the best possible price to book any big name entertainer for your upcoming public, private or corporate event worldwide.

Booking Entertainment works to get the best possible Tracy Chapman booking fee and Tracy Chapman price for our clients while also providing the celebrity or famous entertainer with the level of professionalism and industry norms that they expect from an event run by a professional booking agency and production management.

Booking Entertainment uses our agency / management relationships and over 25 years of production experience to help buyers of headline / top name entertainers and does not claim or represent itself as the exclusive Tracy Chapman agent, manager or management company for any of the artists on our site.

Booking Entertainment does not claim or represent itself as the exclusive booking agency, business manager, publicist, speakers bureau or management for Tracy Chapman or any artists or celebrities on this website.