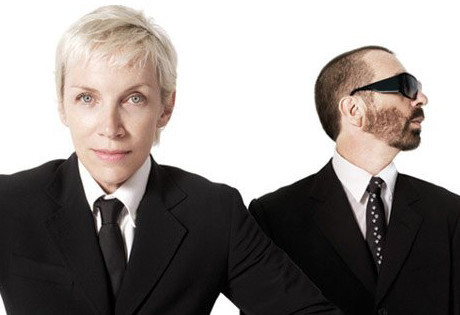 Start by filling out our no-obligation entertainment request form to check pricing and availability for Eurythmics or whoever else you may want.

Our Eurythmics agent will be happy to help you get Eurythmics's availability and booking fee, or the price and availability for any other A-List entertainer, band, comedian or celebrity you may want for your corporate event, private party, wedding, birthday party or public show.

The Eurythmics became one of the most successful duos of the 1980’s, with hits like “Here Comes the Rain Again” and “Sweet Dreams (Are Made of This.)” Their unique sound maximized their potential of the 80’s and paved the way for Annie Lennox to enjoy a solo career well into the new millennium.

The Eurythmics, comprised of Annie Lennox and David Stewart, began in their earliest incarnations as the Tourists, formed in the late 1970’s. They existed as the Tourists for only two years, but released three albums, The Tourists, Reality Effect, and Luminous Basement, and a series of singles, including “So Good to be Back Home Again” and “I Only Want to Be With You,” all reasonably successful in England. Following the breakup of the Tourists, Lennox and Stewart continued on, forming the Eurythmics and embarking on a new debut. With help from Blondie drummer Clem Burke, In the Garden was created and released in 1981. The album received positive reviews but failed to achieve commercial success. Sweet Dreams (Are Made of This) was far more successful. Upon its release in 1983, the title track rocketed to number one on the charts in America. The Eurythmics had finally crossed the ocean to international success.

“Love is a Stranger” came next, also charting well, and the album continued to enjoy success. Touch was released almost a year later, and spawned the hit singles "Who's That Girl?," "Right by Your Side, and "Here Comes the Rain Again.” Be Yourself Tonight followed, and featured greater R&B influence and the hit singles "Sisters Are Doin' It for Themselves." "Would I Lie to You?" and "There Must Be an Angel (Playing With My Heart.)" Revenge, featuring the single “Missionary Man,” was released the following year, but by now both Annie Lennox and Dave Stewart began pursuing other endeavors. Steward produced a number of other artists, including Daryl Hall and Mick Jagger, and Annie Lennox made her big screen debut in Revolution.

They came back together to release Savage in 1987, and again later with We Too Are One, but after their Greatest Hits release in 1991, both Lennox and Stewart seemed solid in their own solo careers and the Eurythmics quietly faded into the background for the rest of the decade, although they did reunite to perform as a duo for A Grammy Salute to the Beatles in 2014. In interviews, both Lennox and Stewart have expressed an interest in reuniting for special effects or concerts in the future as well.

For more information on booking Eurythmics, please contact Booking Entertainment. One of our top booking agents will be happy to work on your behalf to get you the best possible price to book any big name entertainer for your upcoming public, private or corporate event worldwide.

Booking Entertainment works to get the best possible Eurythmics booking fee and Eurythmics price for our clients while also providing the celebrity or famous entertainer with the level of professionalism and industry norms that they expect from an event run by a professional booking agency and production management.

Booking Entertainment uses our agency / management relationships and over 25 years of production experience to help buyers of headline / top name entertainers and does not claim or represent itself as the exclusive Eurythmics agent, manager or management company for any of the artists on our site.

Booking Entertainment does not claim or represent itself as the exclusive booking agency, business manager, publicist, speakers bureau or management for Eurythmics or any artists or celebrities on this website.