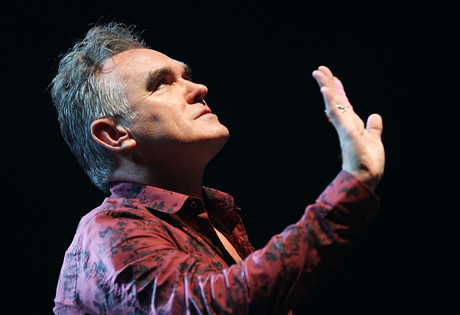 Start by filling out our no-obligation entertainment request form to check pricing and availability for Morrissey or whoever else you may want.

Our Morrissey agent will be happy to help you get Morrissey's availability and booking fee, or the price and availability for any other A-List entertainer, band, comedian or celebrity you may want for your corporate event, private party, wedding, birthday party or public show.

The musician known simply as “Morrissey” was born Steven Patrick Morrissey in 1959 in Lancashire, England. Morrissey grew up in Manchester, and early on in his childhood he began to admire a number of pop stars and singers, such as Billy Fury and Dusty Springfield, and actors such as James Dean.  His career began with the band the Smiths in the 1980’s, for which Morrissey served as the lead singer. The band eventually broke up in 1987, and Morrissey embarked on a solo career.

Viva Hate featured “Suedehead” and “Everyday is Like Sunday” as Morrissey’s first two singles, both of which became hits in 1988. “Interesting Drug” and “The Last of the International Playboys” were also hits off the debut album, and Morrissey followed up with a series of albums for the decade following: Bona Drag (1990), Kill Uncle (1991), Vauxhall and I (1994), The World of Morrissey (1995), Southpaw Grammar (1995), and Maladjusted (1996.)

After Maladjusted, Morrissey disappeared on a hiatus which would last seven years, but he returned in 2004 with You Are The Quarry. Live at Earl’s Court followed in 2005, and Ringleader of the Tormentors came in 2006, a highly successful album which debuted at number one on the charts in the UK and featured the hit singles “In the Future When All’s Well,” “You Have Killed Me,” “I Just Want to See the Boy Happy,” and “The Youngest was the Most Loved.” The album was also praised by the critics for its new sound, largely attributed to the addition of Jesse Tobias, a new guitarist.

A series of tours followed, one in 2006 to promote the album, and another in 2007, a Greatest Hits tour which included performances in eight different countries. Morrissey released Year of Refusal in 2009; the album reached number three on the charts in the UK, and number eleven on the charts in the US. “Something is Squeezing My Skull” and “I’m Throwing My Arms Around Paris” were released as singles.  Morrissey followed up with another tour to promote the album, and then followed with the albums Very Best of Morrissey (2011) and World Peace Is None of Your Business (2014.)

Today, Morrissey continues to perform and record. His latest release, the album Low in High School, arrived in November of 2017. Earlier that year, a feature film biopic of his life, England is Mine, premiered at the Edinburgh Film Festival. Morrissey has also branched into writing in recent years; he penned his autobiography for release in 2013, and in 2015, his debut novel, List of the Lost, was published.

For more information on booking Morrissey, please contact Booking Entertainment. One of our top booking agents will be happy to work on your behalf to get you the best possible price to book any big name entertainer for your upcoming public, private or corporate event worldwide.

Booking Entertainment works to get the best possible Morrissey booking fee and Morrissey price for our clients while also providing the celebrity or famous entertainer with the level of professionalism and industry norms that they expect from an event run by a professional booking agency and production management.

Booking Entertainment uses our agency / management relationships and over 25 years of production experience to help buyers of headline / top name entertainers and does not claim or represent itself as the exclusive Morrissey agent, manager or management company for any of the artists on our site.

Booking Entertainment does not claim or represent itself as the exclusive booking agency, business manager, publicist, speakers bureau or management for Morrissey or any artists or celebrities on this website.