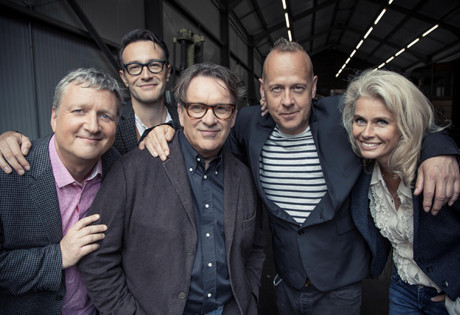 Start by filling out our no-obligation entertainment request form to check pricing and availability for Squeeze or whoever else you may want.

Our Squeeze agent will be happy to help you get Squeeze's availability and booking fee, or the price and availability for any other A-List entertainer, band, comedian or celebrity you may want for your corporate event, private party, wedding, birthday party or public show.

The band known as Squeeze came together in 1974, when Glenn Tilbrook and Chris Difford (both vocals, guitar) joined up Paul Gunn and Jools Holland (drums and keyboards.) Squeeze initially existed by a number of different names, including Skyco and Captain Trundlow’s Sky Company, but Squeeze is the name that stuck, a semi-tribute to the album of the same name by the Velvet Underground. Shortly after beginning, Paul Gunn left the band and was replaced by Gilson Lavis, and Harry Kakoulli came on board to play bass.

Squeeze began by playing the local London music scene. Their debut album, Packet of Three, was released in 1977, and they enjoyed success throughout the decade following. The album Cool for Cats came in 1979, with the title track rising to the top of the charts, and Argybargy followed in 1980, an equally successful album. Squeeze found themselves playing to large crowds throughout the 1980’s, often headlining venues such as New York City’s Madison Square Garden.

Difford and Tilbrook continued recording and performing in the new millennium, both taking on extensive international tours. They announced in 2010 that they would once again begin writing songs for a future Squeeze album, with a new lineup, and Spot the Difference was released to coincide with a tour during the summer.  Squeeze continued the tour into the next two years, and in 2012 they released Live at the Fillmore.

Squeeze continues to write, record, perform, and tour together. In 2015, after nearly two decades of no new material, the band released the album Cradle to the Grave. The album The Knowledge followed in 2017, followed by an extensive North American and Australian tour which will have the band performing will into 2018.

For more information on booking Squeeze, please contact Booking Entertainment. One of our top booking agents will be happy to work on your behalf to get you the best possible price to book any big name entertainer for your upcoming public, private or corporate event worldwide.

Booking Entertainment works to get the best possible Squeeze booking fee and Squeeze price for our clients while also providing the celebrity or famous entertainer with the level of professionalism and industry norms that they expect from an event run by a professional booking agency and production management.

Booking Entertainment uses our agency / management relationships and over 25 years of production experience to help buyers of headline / top name entertainers and does not claim or represent itself as the exclusive Squeeze agent, manager or management company for any of the artists on our site.

Booking Entertainment does not claim or represent itself as the exclusive booking agency, business manager, publicist, speakers bureau or management for Squeeze or any artists or celebrities on this website.