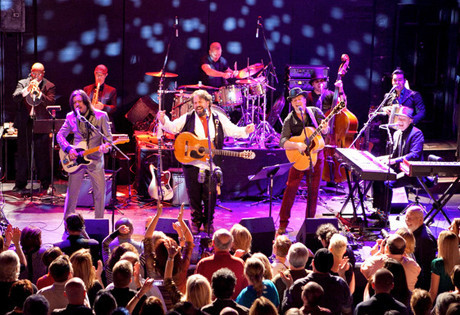 Start by filling out our no-obligation entertainment request form to check pricing and availability for The Mavericks or whoever else you may want.

Our The Mavericks agent will be happy to help you get The Mavericks's availability and booking fee, or the price and availability for any other A-List entertainer, band, comedian or celebrity you may want for your corporate event, private party, wedding, birthday party or public show.

The American band known as The Mavericks was established in the late 1980’s in Miami, Florida, by members Paul Deakin, Robert Reynolds, Ben Peeler, and Raul Malo. With a unique blend of rockabilly, Latin, and country, The Mavericks arrived on the music scene in the early 1990’s with the independently released debut self-titled debut, which didn’t fare well commercially but earned the band their first recording contract with MCA Records.

After signing with the label, The Mavericks released the album From Hell to Paradise, which fared a bit better, spawning the charting single, “Hey Good Looking.” But it was the band’s third album, What a Crying Shame, which became their big breakthrough. The album rose into the top ten on the country music charts in the United States, and up to the number fifty-four spot on the mainstream charts, spawning the top twenty country hits: “What a Crying Shame,” “O What a Thrill,” and “There Goes My Heart.”

The album Music for All Occasions fared even better upon its release in 1995, also rising to the same level on the country and mainstream charts but this time also bringing The Mavericks a Grammy Award for Best Country Performance by a Duo or Group with Vocal, for the single “Here comes the Rain.” The album spawned the additional charting singles: “I Should Have Been True,” “All That Heaven Will Allow,” and “Blue Moon.”

After Music for All Occasions, The Mavericks released the additional albums Trampoline (1998) and The Mavericks (2003), before embarking on a ten year hiatus. The two albums spawned the notable singles: “All You Ever do Is Bring Me Down” (with Flaco Jimenez), “Dance the Night Away,” “Here Comes My Baby,” and “The Air That I Breathe.” They group returned in 2013 with the album In Time, followed by Mono (2015.) Both albums brought The Mavericks back to the top ten on the country charts in the United States.

Today, The Mavericks continue to perform and record with the current lineup of: Raul Malo, Paul Deakin, Jerry Dale McFadden, and Eddie Perez. The Maverick’s most recent release is the album Brand New Day, which arrived in 2017.

Hiring The Mavericks For Corporate Events, Private Parties And Public Concerts Is Easy With Booking Entertainment

For more information on booking The Mavericks, please contact Booking Entertainment. One of our top booking agents will be happy to work on your behalf to get you the best possible price to book any big name entertainer for your upcoming public, private or corporate event worldwide.

Booking Entertainment works to get the best possible The Mavericks booking fee and The Mavericks price for our clients while also providing the celebrity or famous entertainer with the level of professionalism and industry norms that they expect from an event run by a professional booking agency and production management.

Booking Entertainment uses our agency / management relationships and over 25 years of production experience to help buyers of headline / top name entertainers and does not claim or represent itself as the exclusive The Mavericks agent, manager or management company for any of the artists on our site.

Booking Entertainment does not claim or represent itself as the exclusive booking agency, business manager, publicist, speakers bureau or management for The Mavericks or any artists or celebrities on this website.