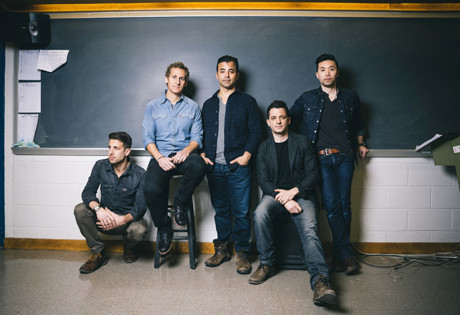 Start by filling out our no-obligation entertainment request form to check pricing and availability for O.A.R. or whoever else you may want.

Our O.A.R. agent will be happy to help you get O.A.R.'s availability and booking fee, or the price and availability for any other A-List entertainer, band, comedian or celebrity you may want for your corporate event, private party, wedding, birthday party or public show.

The American rock band known as O.A.R. (Of a Revolution) was established in 1996 by founding members Chris Culos and Marc Roberge. The two musicians had actually attended high school together in Rockville, Maryland and then also both went on to attend Ohio State University after graduation. While at Ohio, they recruited Benj Gershman, Jerry DePizzo, and Richard On and finalized O.A.R.’s first lineup.

O.A.R. released the albums The Wanderer (1997), Soul’s Aflame (1999), and Risen (2001) before signing with Lava Records and releasing their fourth album, In Between Now and Then (2003). In Between Now and Then would be O.A.R.’s first breakthrough, rising up to the number fifty-four spot on the mainstream charts in the United States. The album spawned O.A.R.’s first charting single, “Hey Girl,” which was a top forty adult alternative hit.

Since that time, O.A.R. has been steadily on the rise, with the top twenty albums All Sides (2008), King (2011), and The Rockville LP (2014.) Notable top twenty adult alternative singles from the band include: “Love and Memories,” “This Town,” “Shattered (Turn the Car Around),” “Heaven,” and “Peace.” O.A.R. has also had the distinction of multiple songs included in various media. The song “Love and Memories” was included in the film She’s the Man, and the song “Love is Worth the Fall” was featured in the soundtrack for the film Twilight. The songs “Wonderful Day” and “Heaven,” were also featured in the documentary iGenius, and O.A.R. performed live for the 2015 Special Olympics World Summer Games for both opening and closing ceremonies.

O.A.R. continues to perform and record. The band most recently released a compilation album, XX, in 2016, just before embarking on a headlining North American tour. Fans can expect O.A.R. to return to the studio in 2017 to work on new material for their next album.

For more information on booking O.A.R., please contact Booking Entertainment. One of our top booking agents will be happy to work on your behalf to get you the best possible price to book any big name entertainer for your upcoming public, private or corporate event worldwide.

Booking Entertainment works to get the best possible O.A.R. booking fee and O.A.R. price for our clients while also providing the celebrity or famous entertainer with the level of professionalism and industry norms that they expect from an event run by a professional booking agency and production management.

Booking Entertainment uses our agency / management relationships and over 25 years of production experience to help buyers of headline / top name entertainers and does not claim or represent itself as the exclusive O.A.R. agent, manager or management company for any of the artists on our site.

Booking Entertainment does not claim or represent itself as the exclusive booking agency, business manager, publicist, speakers bureau or management for O.A.R. or any artists or celebrities on this website.