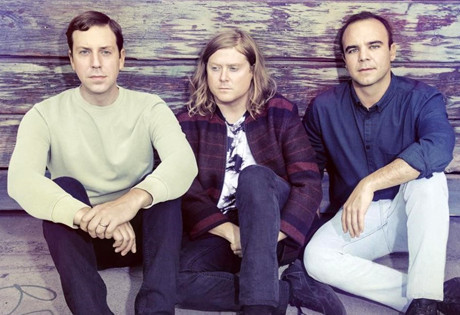 Start by filling out our no-obligation entertainment request form to check pricing and availability for Future Islands or whoever else you may want.

Our Future Islands agent will be happy to help you get Future Islands's availability and booking fee, or the price and availability for any other A-List entertainer, band, comedian or celebrity you may want for your corporate event, private party, wedding, birthday party or public show.

The American synthpop band known as Future Islands was established in Baltimore, Maryland in 2006, by founding members Gerrit Welmers, William Cashion, and Samuel T. Herring. Herring and Welmers grew up as neighbors and became friends in middle school; after rounding out the initial lineup while they were in high school — under the name Art Lord & the Self Portraits — the band gained a local following and began performing at various venues around the Southwest.

In 2006, the band switched its name to Future Islands and self-released a debut EP, Little Advances. While continuing to perform at dozens of venues throughout the year, the group began preparing material for their debut album, which arrived in 2007. Wave Like Home, as it was called, was released in the UK on the Upset! The Rhythm label, creating some international marketing challenges. After securing a deal with the American label Thrill Jockey, Future Islands went on to release the additional albums In Evening Air (2010) and On the Water (2011.) Future Islands released a dozen singles from the albums, but none of them charted, although the songs “Vireo’s Eye” and “Inch of Dust” were both featured in the television series Shameless, and the song “Swept Inside,” from the album Evening Air, was featured in the hit series Fear the Walking Dead.

It was the album Singles, released in 2014 on the 4AD label, that became Future Island’s big breakthrough. On the strength of the single “Seasons (Waiting on You),” the album rose into the top forty on both the UK charts and the mainstream charts in the United States. Additional singles include “A Dream of You and Me,” “Doves,” “Light house,” and “A Song for Our Grandfathers.” Between 2014 and 2017, Future Islands performed at a number of high-profile festivals, including Glastonbury Festival and Coachella, and on television shows such as The Late Show with David Letterman, Jimmy Kimmel Live, The Tonight Show Starring Jimmy Fallon, and Conan.

Today, Future Islands is a band on the rise and just getting started. The group continues to perform and record with the current lineup of Welmers, Herring, and William Cashion. Future Islands most recently released the album The Far Field (2017), featuring the songs “Cave” and “Ran,” the latter of which rose into the top twenty on the mainstream charts in the United States.

For more information on booking Future Islands, please contact Booking Entertainment. One of our top booking agents will be happy to work on your behalf to get you the best possible price to book any big name entertainer for your upcoming public, private or corporate event worldwide.

Booking Entertainment works to get the best possible Future Islands booking fee and Future Islands price for our clients while also providing the celebrity or famous entertainer with the level of professionalism and industry norms that they expect from an event run by a professional booking agency and production management.

Booking Entertainment uses our agency / management relationships and over 25 years of production experience to help buyers of headline / top name entertainers and does not claim or represent itself as the exclusive Future Islands agent, manager or management company for any of the artists on our site.

Booking Entertainment does not claim or represent itself as the exclusive booking agency, business manager, publicist, speakers bureau or management for Future Islands or any artists or celebrities on this website.