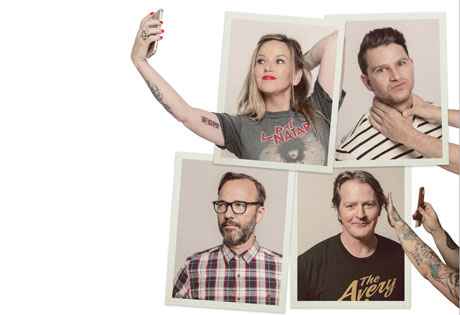 Start by filling out our no-obligation entertainment request form to check pricing and availability for Letters to Cleo or whoever else you may want.

Our Letters to Cleo agent will be happy to help you get Letters to Cleo's availability and booking fee, or the price and availability for any other A-List entertainer, band, comedian or celebrity you may want for your corporate event, private party, wedding, birthday party or public show.

The alternative rock band Letters to Cleo was established in Massachusetts in 1990 by founding members Kay Hanley and Greg McKenna. The two musicians had met in their hometown of Boston, where they began writing and performing music together at various local venues. For a number of their early years, Letters to Cleo relied on help from session musicians and guest artists, until in 1994 the group rounded out its lineup with Michael Eisenstein, Scott Riebling, Stacy Jones, McKenna, and Hanley.

Letters to Cleo self-released their album Aurora Glory Alice in 1993, but the album didn’t chart at that time. Later that year, though, after a critically acclaimed performance at South by Southwest, the band found themselves in the middle of a bidding war for their first record deal. Letters to Cleo signed with Giant Records (of Warner Bros.) and the label re-released Aurora Glory Alice to greater success. Climbing into the top five on the Heatseekers charts, the album spawned the single “Here & Now” and set the stage for two more albums: Wholesale Meats and Fish (1995) and Go! (1997.)

Letters to Cleo disbanded in 2000, but seven years later, the group reunited to perform at a benefit concert. The success of the performance resulted in a series of other “reunion” shows around the country, and a performance on an episode of Parks and Recreation. By 2016, Letters to Cleo had reunited for good, entering the studio to record and release their latest EP, Back to Nebraska.

Today, Letters to Cleo continues to perform and record with the lineup of Hanley, McKenna, Eisenstein, Jones, and Joe Klompus, who performed with their group on their reunion tour and then joined them permanently in 2016. Letters to Cleo recently completed an extensive nationwide tour which ran from 2016 through 2017. They most recently performed at the Geek Bowl XII in Boston in early 2018.

For more information on booking Letters to Cleo, please contact Booking Entertainment. One of our top booking agents will be happy to work on your behalf to get you the best possible price to book any big name entertainer for your upcoming public, private or corporate event worldwide.

Booking Entertainment works to get the best possible Letters to Cleo booking fee and Letters to Cleo price for our clients while also providing the celebrity or famous entertainer with the level of professionalism and industry norms that they expect from an event run by a professional booking agency and production management.

Booking Entertainment uses our agency / management relationships and over 25 years of production experience to help buyers of headline / top name entertainers and does not claim or represent itself as the exclusive Letters to Cleo agent, manager or management company for any of the artists on our site.

Booking Entertainment does not claim or represent itself as the exclusive booking agency, business manager, publicist, speakers bureau or management for Letters to Cleo or any artists or celebrities on this website.