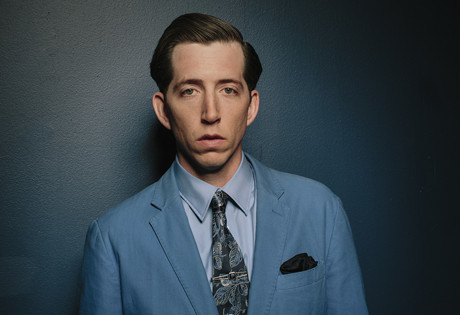 Start by filling out our no-obligation entertainment request form to check pricing and availability for Pokey LaFarge or whoever else you may want.

Our Pokey LaFarge agent will be happy to help you get Pokey LaFarge's availability and booking fee, or the price and availability for any other A-List entertainer, band, comedian or celebrity you may want for your corporate event, private party, wedding, birthday party or public show.

The American musician Pokey LaFarge was born in 1983 in Illinois. Pokey grew up in the Bloomington area of the state, and although today he is known as one of the era’s most notable American roots artists, long before his rise to prominence, his fascination with history and literature as a child led him to many of his grandfather’s friends to hear their stories and discuss various works. As luck would have it, LaFarge was given a banjo by one of them, and his love for music was sparked.

Pokey LaFarge ended up blending his love of classic American literature by authors such as Hemingway and Steinbeck with his newfound love of blues and Americana. After learning to play the banjo and guitar, LaFarge next learned to play the Mandolin, and after graduating from high school, he moved to California to pursue a career as a musician.

Pokey LaFarge released his first album, Marmalade, in 2006, followed by the album Beat, Move & Shake in 2008. But it was the album Riverboat Soul that finally put Pokey LaFarge on the map, earning him an Independent Music Award for Best Americana Album. Since that time, Pokey LaFarge has released the additional albums: Middle of Everywhere (2011), Live in Holland (2012), Pokey LaFarge (2013), and Something in the Water, the latter of which was the artist’s debut on Rounder Records.

Hailed as one of the most notable Americana acts of the era, Pokey LaFarge continues to write and perform with his current backing lineup of: Adam Hoskins, Joey Glynn, Ryan Koenig, Luc Klein, Ryan Weisheit, and Matthew Meyer. Notable singles from Pokey LaFarge include “Central Time,” “What The Rain Will Bring,” “ Garbage Man Blues,” “Close the Door,” and “Lovesick Blues,” the pop standard which LaFarge reimagined for an episode of the hit HBO series Boardwalk Empire.

Pokey LaFarge just released his latest album, Manic Revelations, in 2017. In 2016, he and his band performed at the Stagecoach Music Festival in Coachella, California.

For more information on booking Pokey LaFarge, please contact Booking Entertainment. One of our top booking agents will be happy to work on your behalf to get you the best possible price to book any big name entertainer for your upcoming public, private or corporate event worldwide.

Booking Entertainment works to get the best possible Pokey LaFarge booking fee and Pokey LaFarge price for our clients while also providing the celebrity or famous entertainer with the level of professionalism and industry norms that they expect from an event run by a professional booking agency and production management.

Booking Entertainment uses our agency / management relationships and over 25 years of production experience to help buyers of headline / top name entertainers and does not claim or represent itself as the exclusive Pokey LaFarge agent, manager or management company for any of the artists on our site.

Booking Entertainment does not claim or represent itself as the exclusive booking agency, business manager, publicist, speakers bureau or management for Pokey LaFarge or any artists or celebrities on this website.