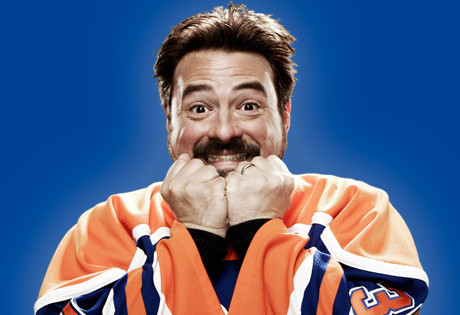 Start by filling out our no-obligation entertainment request form to check pricing and availability for Kevin Smith or whoever else you may want.

Our Kevin Smith agent will be happy to help you get Kevin Smith's availability and booking fee, or the price and availability for any other A-List entertainer, band, comedian or celebrity you may want for your corporate event, private party, wedding, birthday party or public show.

The American actor, screenwriter and producer Kevin Smith was born in 1970 in New Jersey, where he grew up fascinated with movies. Young Kevin was particularly inspired by the film Slacker, and in 1994 he wrote, directed, and co-produced the low budget film Clerks. Clerks went on to win the Filmmakers’ Trophy at the Sundance Film Festival and Kevin Smith quickly became a household name for the generation known as Gen-X.

Smith is also a regular contributor to a number of print publications, including Arena magazine, and he has published a number of books, including: Silent Bob Speaks (2005), My Boring Ass Life: The Uncomfortably Candid Diary of Kevin Smith (2007), and Shootin’ the Sh*t with Kevin Smith (2011.) In a creative writing capacity, Kevin Smith has created a number of comic books and storylines, including: Chasing Dogma, the Green Arrow series, a Batman series, and the Bionic Man (with Jonathan Lau and Phil Hester.)

Kevin Smith continues to produce, direct, and write. He frequently appears in documentary films discussing the craft of filmmaking.

For more information on booking Kevin Smith, please contact Booking Entertainment. One of our top booking agents will be happy to work on your behalf to get you the best possible price to book any big name entertainer for your upcoming public, private or corporate event worldwide.

Booking Entertainment works to get the best possible Kevin Smith booking fee and Kevin Smith price for our clients while also providing the celebrity or famous entertainer with the level of professionalism and industry norms that they expect from an event run by a professional booking agency and production management.

Booking Entertainment uses our agency / management relationships and over 25 years of production experience to help buyers of headline / top name entertainers and does not claim or represent itself as the exclusive Kevin Smith agent, manager or management company for any of the artists on our site.

Booking Entertainment does not claim or represent itself as the exclusive booking agency, business manager, publicist, speakers bureau or management for Kevin Smith or any artists or celebrities on this website.