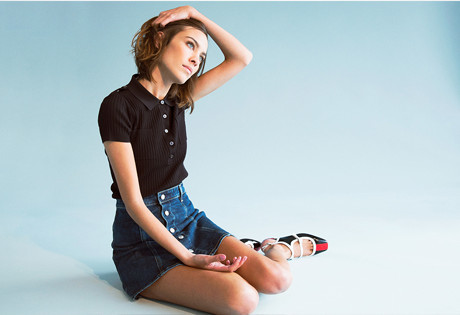 Start by filling out our no-obligation entertainment request form to check pricing and availability for Alexa Chung or whoever else you may want.

Our Alexa Chung agent will be happy to help you get Alexa Chung's availability and booking fee, or the price and availability for any other A-List entertainer, band, comedian or celebrity you may want for your corporate event, private party, wedding, birthday party or public show.

The British fashion model, writer for Vogue, and DJ Alexa Chung was born in 1983 in Winchester, Hampshire. Chung was discovered by a modeling agency in London when she was only sixteen years old, and she immediately began modeling for such high profile magazines such as Elle Girl and CosmoGIRL, in addition to modeling for Urban Outfitters, Sony Ericsson, and a number of other large companies. Chung continued to model for about four years, until she began studying journalism, which inspired her to segue into television.

Alexa began her television hosting career on Channel 4’s Popworld, which led to her own radio show associated with the network. Chung also hosted Vanity Lair, Freshly Squeezed, and served as a presenter for the BBC Three series The Wall in 2008. By 2009, Chung’s work had shifted to more fashion world commentary and music program hosting, eventually launching her series It’s On with Alexa Chung for the MTV network. During this entire time, Chung also began her career as a writer and contributor for such notable publications as British Vogue and The Independent, and she published her own book, titled It, in 2013.

Alexa Chung’s time with Channel 4’s Popworld sparked her interest and love of music, which has continued to expand since that time. After many years appearing frequently at music festivals and music events, Chung began her own work as a DJ in 2011. Today, her DJ-ing skills, both live and via the airwaves, are in high demand and she frequently DJs for private parties and major events, often alongside other up and coming celebrity DJ’s.

Most recently, Alexa Chung returned to the runway to participate in Fashion Week on behalf of Stella McCartney in 2012. She also recently worked with Tommy Hilfiger as a model and editor for their 2014 and 2015 collections.

For more information on booking Alexa Chung, please contact Booking Entertainment. One of our top booking agents will be happy to work on your behalf to get you the best possible price to book any big name entertainer for your upcoming public, private or corporate event worldwide.

Booking Entertainment works to get the best possible Alexa Chung booking fee and Alexa Chung price for our clients while also providing the celebrity or famous entertainer with the level of professionalism and industry norms that they expect from an event run by a professional booking agency and production management.

Booking Entertainment uses our agency / management relationships and over 25 years of production experience to help buyers of headline / top name entertainers and does not claim or represent itself as the exclusive Alexa Chung agent, manager or management company for any of the artists on our site.

Booking Entertainment does not claim or represent itself as the exclusive booking agency, business manager, publicist, speakers bureau or management for Alexa Chung or any artists or celebrities on this website.