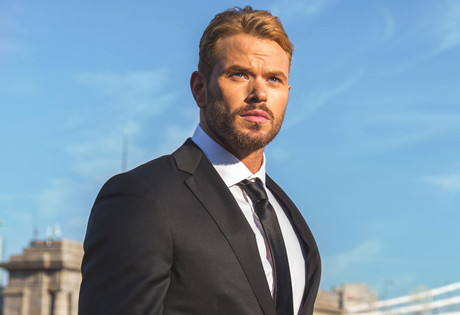 Start by filling out our no-obligation entertainment request form to check pricing and availability for Kellan Lutz or whoever else you may want.

Our Kellan Lutz agent will be happy to help you get Kellan Lutz's availability and booking fee, or the price and availability for any other A-List entertainer, band, comedian or celebrity you may want for your corporate event, private party, wedding, birthday party or public show.

The American actor and model Kellan Lutz was born in Dickinson, North Dakota in 1985. Long before Lutz’s breakthrough on the big screen in the Twilight film series, he grew up in the Midwest, eventually settling in Arizona to graduate from high school and go on to pursue a degree in chemical engineering at Chapman University. Lutz’s love of acting redirected his life, however, and after some roles on a number of television shows, he decided to instead pursue a career in acting full-time.

Early roles for Lutz include the series Six Feet under, Heroes, and CSI: Crime Scene Investigation. His big breakthrough came when he was cast in the role of Emmett Cullen in the Twilight Film series in 2008, and he reprised his role for each of the film installments in the series. Since Twilight, Kellan Lutz has also appeared in: A Nightmare on Elm Street (2010), A Warrior’s Heart (2011), Arena (2011), Java Heat (2013), The Expendables 3 (2014), and Experimenter (2015.)

When not acting, Kellan Lutz can often be found modeling for Calvin Klein, or supporting one of his favorite charities, including PETA and other animal-rights oriented charities. Lutz has also recently surfaced on the celebrity DJ circuit, taking over the turntables at such notable venues as The Water Club. Lutz is scheduled to appear in the films Extraction and Money, both scheduled for release in 2016.

For more information on booking Kellan Lutz, please contact Booking Entertainment. One of our top booking agents will be happy to work on your behalf to get you the best possible price to book any big name entertainer for your upcoming public, private or corporate event worldwide.

Booking Entertainment works to get the best possible Kellan Lutz booking fee and Kellan Lutz price for our clients while also providing the celebrity or famous entertainer with the level of professionalism and industry norms that they expect from an event run by a professional booking agency and production management.

Booking Entertainment uses our agency / management relationships and over 25 years of production experience to help buyers of headline / top name entertainers and does not claim or represent itself as the exclusive Kellan Lutz agent, manager or management company for any of the artists on our site.

Booking Entertainment does not claim or represent itself as the exclusive booking agency, business manager, publicist, speakers bureau or management for Kellan Lutz or any artists or celebrities on this website.