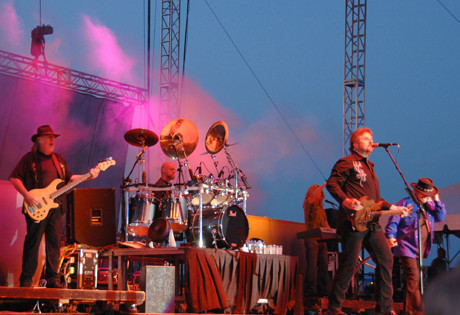 Start by filling out our no-obligation entertainment request form to check pricing and availability for .38 Special or whoever else you may want.

Our .38 Special agent will be happy to help you get .38 Special's availability and booking fee, or the price and availability for any other A-List entertainer, band, comedian or celebrity you may want for your corporate event, private party, wedding, birthday party or public show.

The group known as .38 Special was established in Jacksonville, Florida in the 1970’s when Donnie Van Zant teamed up with Jeff Carlisi (guitar), Don Barnes (guitar, vocals), Ken Lyons (bass), Jack Grondin (drums), and Steve Brookins (drums.) The band .38 Special would enjoy a string of hits throughout the 1970’s and 1980’s, and firmly establish their place in Southern Rock history.

Before 1979’s Rockin’ Into the Night, bassist Lyons left to be replaced by Larry Junstrom. Rockin’ Into the Night  became a hit, but only a moderate one. At this time, .38 Special took its southern rock sound and modified it to incorporate more “arena rock.” The blend helped to rocket .39 Special to greater success and a wider audience. The first .38 Special album to reveal this new sound, 1981’s Wild-Eyed Southern Boys, would go platinum and spawn the iconic single “Hold On Loosley,” which hit the Top 40. “Caught Up in You,” “If I’d Been the One,” and “Back Where You Belong” would follow in 1982, 1983, and 1984, and in 1985 .38 Special would find success with “Teacher, Teacher,” a single written by Bryan Adams and Jim Vallance. “Teacher, Teacher” spent ten weeks on the Billboard charts and climbed to number four.

After Barnes and Brookins left .38 Special in 1987, Danny Chauncey replaced Barnes just in time for the release of 1989’s Rock & Roll Strategy. The single “Second Chance” would hit number one on the Billboard’s Adult Contemporary Chart. In 1991, Barnes returned to .38 Special and Scott Hoffman and Bobby Capps were added to the lineup as well. In 1997, .38 Special released Resolution on Razor & Tie Records. Live at Sturgis (1999) would follow.

In the new millennium, .38 Special has toured with Lynyrd Skynyrd and Hank Williams (2007) and filmed a special with Trace Adkins, performing a variety of their own hits along with Adkins’. In 2009, .38 Special toured with Styx and REO Speedwagon. Although Donnie Van Zant stopped performing with the band in 2012, he remained as one of the band’s writers and continued to record with them in studio for two more years, before leaving officially in 2014.

Today, .38 Special continues to perform and record with the new lineup of Don Barnes, Danny Chauncey, Bobby Capps, Gary Moffatt, and Barry Dunaway. The group recently completed an extensive tour in the summer of 2017.

For more information on booking .38 Special, please contact Booking Entertainment. One of our top booking agents will be happy to work on your behalf to get you the best possible price to book any big name entertainer for your upcoming public, private or corporate event worldwide.

Booking Entertainment works to get the best possible .38 Special booking fee and .38 Special price for our clients while also providing the celebrity or famous entertainer with the level of professionalism and industry norms that they expect from an event run by a professional booking agency and production management.

Booking Entertainment uses our agency / management relationships and over 25 years of production experience to help buyers of headline / top name entertainers and does not claim or represent itself as the exclusive .38 Special agent, manager or management company for any of the artists on our site.

Booking Entertainment does not claim or represent itself as the exclusive booking agency, business manager, publicist, speakers bureau or management for .38 Special or any artists or celebrities on this website.