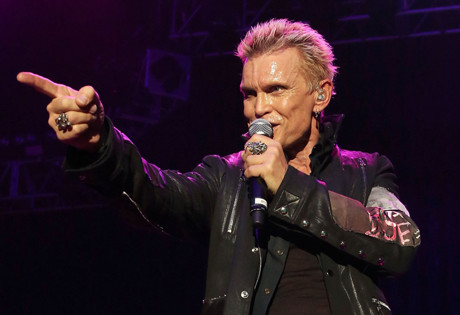 Start by filling out our no-obligation entertainment request form to check pricing and availability for Billy Idol or whoever else you may want.

Our Billy Idol agent will be happy to help you get Billy Idol's availability and booking fee, or the price and availability for any other A-List entertainer, band, comedian or celebrity you may want for your corporate event, private party, wedding, birthday party or public show.

Billy Idol was one of the artists of the 1980’s whose launch to stardom was perfectly timed with the launch of the first television video network, MTV. A good-looking “bad boy,” Billy Idol was the precise combination of attitude, sound, and presence to fully capitalize on the video craze and what it had to offer.

Billy Idol was born in 1955 in Middlesex, England. As a young man, he joined a group of punk rockers who idolized the Sex Pistols, and learned quickly that he too could be a strong front man for the punk craze. Idol began playing guitar for a group that never fully materialized, but after picking up the microphone and recruiting John Towe, Tony James, and Bob Andrews, he formed the band Generation X in 1976.

They signed to Chrysalis and released Generation X in 1978, Valley of the Dolls in 1979, and Kiss Me Deadly in 1981. That was as far as they got, before the band split up. Billy Idol relocated to New York City and gave a solo career as a try. Don’t Stop was released in 1981, and Billy Idol found himself with another deal, this time as a solo artist. Billy Idol was released in 1982, and on the strength of the videos for "White Wedding" and "Dancing With Myself,” Billy Idol found himself with plenty of play on MTV. The album eventually went gold, and set the stage for Rebel Yell, his 1984 breakthrough. Albums such as Whiplash Smile (1987), Charmed Life (1990), and Cyberpunk (1993), with hits like  "Eyes Without a Face," "Flesh for Fantasy”, "To Be a Lover" and "Sweet Sixteen" followed, until personal demons and challenges pulled Billy Idol away from the spotlight for the second half of the 1990’s.

He resurfaced in 1998 for a brief cameo in The Wedding Singer, and garnered some renewed interest. A Greatest Hits set was released in 2001, and Sanctuary followed in 2005. The album reached number forty-six on the charts, and Billy Idol followed up with dates on the 2005 Vans Warped Tour and appearances at the Downtown Festival in Donington Park in the UK and the Voodoo Music Experience in New Orleans. In 2008, “White Wedding” appeared on Rock Band 2 and “Rebel Yell” appeared on Guitar Hero World Tour. That same year, Billy Idol released The Very Best of Billy Idol: Idolize Yourself.

Most recently, Billy Idol returned with the studio album Kings & Queens of the Underground in 2014, his first studio album in almost a decade. Later that same year, he published his autobiography, Dancing with Myself. Billy Idol will spend May and October of 2017 performing in Las Vegas as part of his Billy Idol: Forever short-term residency. A nationwide tour is expected to follow in 2018.

For more information on booking Billy Idol, please contact Booking Entertainment. One of our top booking agents will be happy to work on your behalf to get you the best possible price to book any big name entertainer for your upcoming public, private or corporate event worldwide.

Booking Entertainment works to get the best possible Billy Idol booking fee and Billy Idol price for our clients while also providing the celebrity or famous entertainer with the level of professionalism and industry norms that they expect from an event run by a professional booking agency and production management.

Booking Entertainment uses our agency / management relationships and over 25 years of production experience to help buyers of headline / top name entertainers and does not claim or represent itself as the exclusive Billy Idol agent, manager or management company for any of the artists on our site.

Booking Entertainment does not claim or represent itself as the exclusive booking agency, business manager, publicist, speakers bureau or management for Billy Idol or any artists or celebrities on this website.