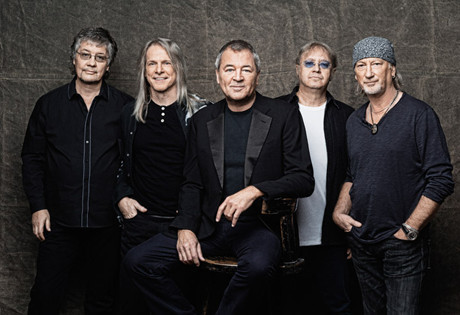 Start by filling out our no-obligation entertainment request form to check pricing and availability for Deep Purple or whoever else you may want.

Our Deep Purple agent will be happy to help you get Deep Purple's availability and booking fee, or the price and availability for any other A-List entertainer, band, comedian or celebrity you may want for your corporate event, private party, wedding, birthday party or public show.

Despite a successful single from the album, “Hush,” Shades of Deep Purple did not fare well commercially. Deep Purple’s follow up, The Book of Taliesyn, spawned another top forty single, “Kentucky Woman,” but still the band had not cracked the top of the charts. Undaunted, they released a self-titled third album, and Deep Purple changed the lineup, releasing Simper and Evans to be replaced by Roger Glover and Ian Gillian.

The result was a more rock-oriented sound, and Concerto for Group and Orchestra was released in 1970, still to lukewarm reception, but it paved the way for a new, stronger sound that Blackmore sought to maximize. The result was Deep Purple in Rock (1970), which sold over a million copies and finally launched the band to superstardom. Fireball followed in 1971, with a chart-topping hit “Strange Kind of Woman,” but the best was yet to come, with the iconic and longest lasting Deep Purple hit, “Smoke on the Water.” The single was inspired by an unfortunate turn of events which suspended Deep Purple’s next album, when the recording studio at which they’d intended to record burned to the ground in a freak accident. The song ended up on the album Machine Head, and hit the top five on the charts. The release of Who Do We Think We Are in 1973, featuring the hit “Woman from Tokyo,” firmed up the band’s elite status.

More changes to the lineup saw Gillian and Glover leave the band, to be replaced by Glenn Hughes and David Coverdale. Stormbringer followed in 1974, and shortly thereafter Blackmore left as well, to be replaced by Tommy Bolin.  Deep Purple reunited in part with the lineup of Blackmore, Gillian, Lord, Glover, and Paice in 1984 to create the album Perfect Strangers.

Additional albums followed: The House of Blue Light (1987), Slaves and Masters (1990), The Battle Rages On (1993), Purpendicular (1996), Abandon (1998), and then at the dawn of the millennium Deep Purple released a four-disc set, Shades, covering tracks from 1968 to 1998, including those previously unreleased and demos. Bananas dropped in 2003, and Rapture of the Deep followed in 2005, and additional collections and live DVDs of Deep Purple music and performances have followed.  The band continues to tour well into the new millennium with the current lineup of Paice, Glover, Gillian, Steve Morse, and Don Airey.

Today, in the new millennium, Deep Purple continues to perform and record. The group has released two albums in recent years—Now What (2013), and Infinite (2017.) Since 2013, the group has also toured every single year; the group was also recently inducted in to the Rock and Roll Hall of Fame, in 2016.

For more information on booking Deep Purple, please contact Booking Entertainment. One of our top booking agents will be happy to work on your behalf to get you the best possible price to book any big name entertainer for your upcoming public, private or corporate event worldwide.

Booking Entertainment works to get the best possible Deep Purple booking fee and Deep Purple price for our clients while also providing the celebrity or famous entertainer with the level of professionalism and industry norms that they expect from an event run by a professional booking agency and production management.

Booking Entertainment uses our agency / management relationships and over 25 years of production experience to help buyers of headline / top name entertainers and does not claim or represent itself as the exclusive Deep Purple agent, manager or management company for any of the artists on our site.

Booking Entertainment does not claim or represent itself as the exclusive booking agency, business manager, publicist, speakers bureau or management for Deep Purple or any artists or celebrities on this website.