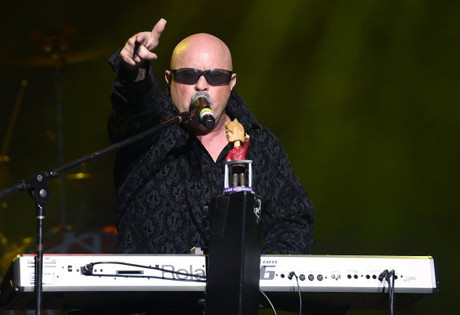 Start by filling out our no-obligation entertainment request form to check pricing and availability for Flock Of Seagulls or whoever else you may want.

Our Flock Of Seagulls agent will be happy to help you get Flock Of Seagulls's availability and booking fee, or the price and availability for any other A-List entertainer, band, comedian or celebrity you may want for your corporate event, private party, wedding, birthday party or public show.

The new wave band known as A Flock of Seagulls was established in Liverpool, England in 1979, by founding members Ali Score and Mike Score. The brothers added Francis Maudsley and Paul Reynolds to the lineup, and began performing around town in various clubs and bars, establishing a following and garnering the interest of record lables.

Within a short time, A Flock of Seagulls signed its first record deal with Jive Records, starting with a self-titled debut album, which featured the title track and the song “It’s Not Me Talking.” While both were hits, the band experienced its biggest breakthrough with the song “I Ran (So Far Away),” which arrived in 1982. The song rose into the top ten in the Untied States and reached the number one spot on the Australian charts, eventually becoming a worldwide hit and establishing A Flock of Seagulls as one of the most popular new wave bands of the era.

After A Flock of Seagulls, the band released: Listen (1983), The Story of a Young Heart (1984), Dream Come True (1986) and The Light at the End of the World (1995.) Notable additional singles from the band include: “Space Age Love Song,” “Wishing (If I Had a Photograph of You),” “Nightmares,” “The More You Live, the More You Love,” “Who’s That Girl (She’s Got It),” and “Rainfall.” An instrumental track featured on A Flock of Seagulls’ debut album, “D.N.A.,” also garnered the band its only Grammy Award, for Best Rock Instrumental Performance in 1983.

Although A Flock of Seagulls disbanded in the late 1990’s, Mike Score recently resurfaced with a solo career. In early 2013, he released the songs “Somebody Like You” and “All I Wanna Do,” and a year later, he released his debut solo album, Zeebratta. Score is currently performing and touring as a solo act, much to the delight of Flock of Seagulls’ fans everywhere.

For more information on booking Flock Of Seagulls, please contact Booking Entertainment. One of our top booking agents will be happy to work on your behalf to get you the best possible price to book any big name entertainer for your upcoming public, private or corporate event worldwide.

Booking Entertainment works to get the best possible Flock Of Seagulls booking fee and Flock Of Seagulls price for our clients while also providing the celebrity or famous entertainer with the level of professionalism and industry norms that they expect from an event run by a professional booking agency and production management.

Booking Entertainment uses our agency / management relationships and over 25 years of production experience to help buyers of headline / top name entertainers and does not claim or represent itself as the exclusive Flock Of Seagulls agent, manager or management company for any of the artists on our site.

Booking Entertainment does not claim or represent itself as the exclusive booking agency, business manager, publicist, speakers bureau or management for Flock Of Seagulls or any artists or celebrities on this website.