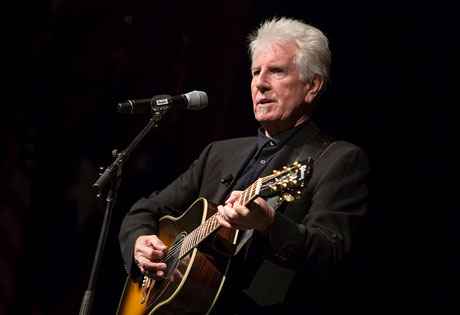 Start by filling out our no-obligation entertainment request form to check pricing and availability for Graham Nash or whoever else you may want.

Our Graham Nash agent will be happy to help you get Graham Nash's availability and booking fee, or the price and availability for any other A-List entertainer, band, comedian or celebrity you may want for your corporate event, private party, wedding, birthday party or public show.

The British singer-songwriter Graham Nash was born in 1942 in Lancashire, England. Long before Nash rose to fame as a member of the American group Crosby, Stills, Nash & Young, he grew up in Salford, England and in his teenage years began to experiment with a number of different pop groups. In 1960, Graham co-founded The Hollies, which went on to become a highly successful band in England, and launched his own publishing company five years later.

Graham Nash remained with the Hollies for nearly a decade, until 1968, two years after meeting Stephen Stills "AND" David Crosby while touring through the United States with the Hollies. It was that chance meeting that led to the formation of Crosby, Stills, Nash, & Young, and the group went on to become one of the era’s most cherished groups. As a member of CSNY, Graham Nash wrote or co-wrote many of the group’s hits, including “Teach Your Children” and “Our House.”

During the rise of Crosby, Stills, Nash, and Young, Graham Nash became very politically active, which is reflected in his songs “Immigration Man” and “Military Madness.” To this day, Nash continues to perform frequently with Crosby, teaming up in the early seventies to perform as a duo and even recently performing in 2011 at the Occupy Wall Street event. Graham Nash continues to advocate publicly for a variety of political causes, including environmental conservation, anti-nuclear endeavors, and human rights issues.

Graham Nash has also become well-known for his photography. Throughout the 1980’s and 1990’s, Nash’s photographs toured internationally as part of the Graham Nash collection. In the early 1990’s, Nash sold his print collection, of more than two thousand works, at a Sotheby’s auction. The sale ended up breaking records for the highest grossing sale of a single private collection of photography.

For more information on booking Graham Nash, please contact Booking Entertainment. One of our top booking agents will be happy to work on your behalf to get you the best possible price to book any big name entertainer for your upcoming public, private or corporate event worldwide.

Booking Entertainment works to get the best possible Graham Nash booking fee and Graham Nash price for our clients while also providing the celebrity or famous entertainer with the level of professionalism and industry norms that they expect from an event run by a professional booking agency and production management.

Booking Entertainment uses our agency / management relationships and over 25 years of production experience to help buyers of headline / top name entertainers and does not claim or represent itself as the exclusive Graham Nash agent, manager or management company for any of the artists on our site.

Booking Entertainment does not claim or represent itself as the exclusive booking agency, business manager, publicist, speakers bureau or management for Graham Nash or any artists or celebrities on this website.