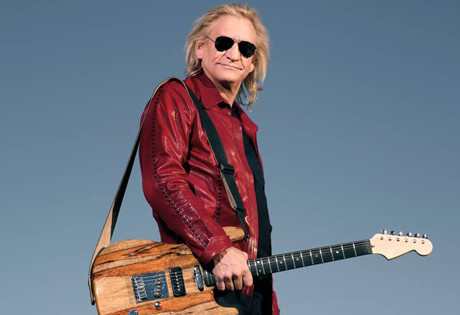 Start by filling out our no-obligation entertainment request form to check pricing and availability for Joe Walsh or whoever else you may want.

Our Joe Walsh agent will be happy to help you get Joe Walsh's availability and booking fee, or the price and availability for any other A-List entertainer, band, comedian or celebrity you may want for your corporate event, private party, wedding, birthday party or public show.

Joe Walsh has remained an iconic figure in rock & roll, from his early hits with the James Gang to his later hits with the Eagles, and from his successful solo career which followed. Born in 1947 in Wichita, Kansas, Joe Walsh attended Kent State University and studied the oboe, clarinet, and bass. He eventually joined a college-based band called the Measles, playing guitar, between 1965 and 1969, and then the James Gang sometime later.

Walsh’s debut album, The James Gang Rides Again, featured the single "Funk #49,” bringing the band its first gold status single. The album Thirds, which followed, garnered another hit with “Walk Away.” Shortly after, Joe Walsh left the James Gang, moving to Colorado and forming the band Barnstorm. The new group’s self-titled debut, released in 1972, led to his solo debut with The Smoker You Drink, the Player You Get. On the strength of the single “Rocky Mountain Way,” it hit the Top Ten and Joe Walsh followed up with So What in 1974. But Seriously, Folks, came in 1978, but it was the soundtrack to Urban Cowboy which launched “All Night Long” and led the album to success in 1980. There Goes the Neighborhood (1981) followed, and then You Bought It--You Name It (1983) and then The Confessor followed two years after in 1985.

Joe Walsh continues to perform and tour well into the new millennium. He performed at Eric Clapton's Crossroads Guitar Festival in 2004, and in 2006, he reunited with Dale Peters and Jim Fox for a James Gang reunion tour. In 2012, he released Analog Man, an album co-produced by Jeff Lynne and co-written with Tommy Lee James for some of the tracks. The song “One Day at a Time” details the artists struggles with addiction and substance abuse earlier in the career, and is among Walsh’s most personal compositions.

Most recently, the Eagles released the documentary History of the Eagles in 2013, creating a resurgence in public interest. A supporting tour followed, lasting well into 2015; in the year following, Joe Walsh appeared in performance on the television reality competition The Voice.

For more information on booking Joe Walsh, please contact Booking Entertainment. One of our top booking agents will be happy to work on your behalf to get you the best possible price to book any big name entertainer for your upcoming public, private or corporate event worldwide.

Booking Entertainment works to get the best possible Joe Walsh booking fee and Joe Walsh price for our clients while also providing the celebrity or famous entertainer with the level of professionalism and industry norms that they expect from an event run by a professional booking agency and production management.

Booking Entertainment uses our agency / management relationships and over 25 years of production experience to help buyers of headline / top name entertainers and does not claim or represent itself as the exclusive Joe Walsh agent, manager or management company for any of the artists on our site.

Booking Entertainment does not claim or represent itself as the exclusive booking agency, business manager, publicist, speakers bureau or management for Joe Walsh or any artists or celebrities on this website.