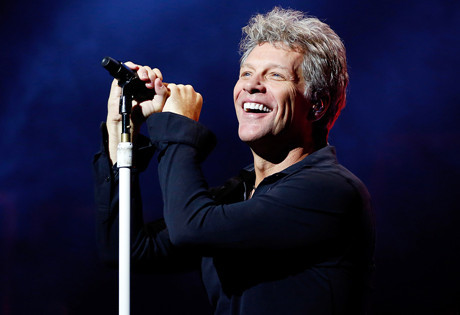 Start by filling out our no-obligation entertainment request form to check pricing and availability for Jon Bon Jovi or whoever else you may want.

Our Jon Bon Jovi agent will be happy to help you get Jon Bon Jovi's availability and booking fee, or the price and availability for any other A-List entertainer, band, comedian or celebrity you may want for your corporate event, private party, wedding, birthday party or public show.

Jon Bon Jovi was born John Francis Bongiovi, Jr. in 1962. Although best known as the creator and front man of the band Bon Jovi, Jon’s contributions to music and film reach far beyond his association with the band.

As a young man, Jon Bon Jovi swapped school commitments for opportunities to play with local bands, and by the age of sixteen, he was a regular in the local clubs. A job sweeping floors at his cousin’s recording studio, The Power Station, gave Jon the opportunity to record “Runaway,” a song he wrote during his daily commutes from Jersey to New York City.

After rejections from a number of record companies, a local rock station agreed to feature “Runaway” on their play list of local homegrown talent. It quickly became a hit on the local charts, and eventually Mercury offered Jon Bon Jovi a recording contract. In 1983, Bon Jovi was founded, after Jon found Tico Torres, David Bryan, Alec Jon Such, and Richie Sambora to join him.

The band Bon Jovi was born, and Jon would find himself with a remarkable future as a singer, performer, actor, and activist, all roles he continues to fulfill today.

As a musician, Jon Bon Jovi has released eleven studio albums with Bon Jovi and two albums for his solo career. Bon Jovi received a Golden Globe for “Blaze of Glory,” and was given recognition by VH1 as one of their “100 Sexiest Artists.” In total, Jon Bon Jovi has sold more than 130 million albums worldwide.

His charitable work includes Habitat for Humanity, Project H.O.M.E., the Elizabeth Glaser Pediatric AIDS foundation, the Special Olympics, and the American Red Cross. He sang “Everybody Hurts” alongside twenty-one other artists in aid of relief for Haiti following the 2010 earthquake.

Between 1996 and 2003, he was named one of the “50 Most Beautiful People In The World" and “Sexiest Rock Star” in People Magazine.

For his achievements, Monmouth University awarded him an honorary Doctorate degree in 2001.

For more information on booking Jon Bon Jovi, please contact Booking Entertainment. One of our top booking agents will be happy to work on your behalf to get you the best possible price to book any big name entertainer for your upcoming public, private or corporate event worldwide.

Booking Entertainment works to get the best possible Jon Bon Jovi booking fee and Jon Bon Jovi price for our clients while also providing the celebrity or famous entertainer with the level of professionalism and industry norms that they expect from an event run by a professional booking agency and production management.

Booking Entertainment uses our agency / management relationships and over 25 years of production experience to help buyers of headline / top name entertainers and does not claim or represent itself as the exclusive Jon Bon Jovi agent, manager or management company for any of the artists on our site.

Booking Entertainment does not claim or represent itself as the exclusive booking agency, business manager, publicist, speakers bureau or management for Jon Bon Jovi or any artists or celebrities on this website.