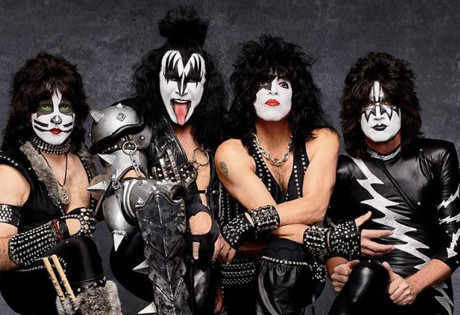 Start by filling out our no-obligation entertainment request form to check pricing and availability for Kiss or whoever else you may want.

Wondering how to book Kiss for your event? Let Booking Entertainment be Your entertainment booking agency for booking Kiss for events worldwide.

Our Kiss agent will be happy to help you get Kiss's availability and booking fee, or the price and availability for any other A-List entertainer, band, comedian or celebrity you may want for your corporate event, private party, wedding, birthday party or public show.

Kiss came together after Paul Stanley and Gene Simmons dissolved a band by the name of Wicked Lester. They joined forces with Peter Criss and Ace Frehley, and by 1973, the newly formed Kiss had acquired a record contract. Kiss’s first year together resulted in three moderately successful albums, but in 1975, with the release of Alive!, they hit the top of the charts with the single “Rock and Roll All Nite,” and rose to stardom. Alive! went to platinum status, and Kiss began its decades long reign in the arena of rock.

Kiss provided a unique presence on stage: all the members dressed in elaborate makeup and outlandish costumes, and combined pyrotechnics to create an experience that appealed to thousands of teenage fans. The album Destroyer, released in 1976, also gave them their first top 10 single with “Beth,” and the albums which followed all certified platinum as well: Rock And Roll Over, Love Gun and Alive II. It wasn’t long before Kiss was among the most popular live performance in the United States, and the band’s gimmicks lent themselves to even broader commercial reach, with merchandising to include board games, pinball machines, and make-up kits. ??

In 1978, each of the individual members of Kiss released solo albums, all enjoying significant success: Ace Frehley’s album featured the hit “New York Groove” and landed in the top twenty on the charts, and Gene Simmons had a hit with “Radioactive.”  Next, Kiss released Dynasty (1979), but the years following proved strenuous for the band. Peter Cross was replaced by Anton Fig, and then in 1980 Fig was replaced by Eric Carr. Although Kiss continued to release albums, including Music from the Elder, by 1982 Frehley had also left the band and by 1983, Kiss was ready for a change.
Kiss did the unthinkable: they dropped the makeup that had for a full decade visually concealed their identities, doing so live on MTV. From there on out, Kiss continued to perform, but without the makeup. In the next few years, Kiss continued to release successful albums: Lick it Up, Animalize, Asylum, Crazy Nights, and Hot in the Shade, before Eric Carr was tragically lost to cancer. He was only forty-one at the time of his death.

Kiss reunited with its original lineup on MTV in 1995, and then released Carnival of Souls: The Final Sessions (1997) and Psycho Circus (1998), but another ten years passed before the release of Sonic Boom in 2009. Now, well into the new millennium, Kiss continues to record, perform, and tour with the current lineup of Stanley, Simmons, Singer, and Tommy Thayer. The band embarked on an extensive co-headlining tour with Def Leppard in 2014, and two years later launched their own summer of 2016 tour. In 2014, Kiss was inducted into the Rock and Roll Hall of Fame.

For more information on booking Kiss, please contact Booking Entertainment. One of our top booking agents will be happy to work on your behalf to get you the best possible price to book any big name entertainer for your upcoming public, private or corporate event worldwide.

Booking Entertainment works to get the best possible Kiss booking fee and Kiss price for our clients while also providing the celebrity or famous entertainer with the level of professionalism and industry norms that they expect from an event run by a professional booking agency and production management.

Booking Entertainment uses our agency / management relationships and over 25 years of production experience to help buyers of headline / top name entertainers and does not claim or represent itself as the exclusive Kiss agent, manager or management company for any of the artists on our site.

Booking Entertainment does not claim or represent itself as the exclusive booking agency, business manager, publicist, speakers bureau or management for Kiss or any artists or celebrities on this website.