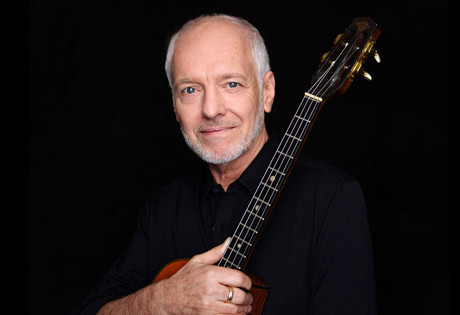 Start by filling out our no-obligation entertainment request form to check pricing and availability for Peter Frampton or whoever else you may want.

Our Peter Frampton agent will be happy to help you get Peter Frampton's availability and booking fee, or the price and availability for any other A-List entertainer, band, comedian or celebrity you may want for your corporate event, private party, wedding, birthday party or public show.

Peter Frampton was born in 1950 in Kent and began playing guitar at the young age of eight. He took several years of classical lessons before moving on to rock & roll. In 1966, Peter Frampton withdrew form school to join the group the Herd, a band which experienced some success in the late 1960's in Britain.

In 1969, Peter Frampton joined Humble Pie, but left the band in 1971 to pursue a solo career. Peter Frampton released a few albums over the next few years, and although none of them achieved great success, he established a loyal following through his numerous live performances while touring.

Frampton, in 1975, finally became his big break, his first hit in the United States, going gold and reaching into the Top 40.

Frampton Comes Alive!, a double-set, was released in 1975, and rocketed to the top of the charts, selling over sixteen million copies. It stayed on the charts for two years, and featured classic Frampton hits such as "Show Me the Way," and "Baby, I Love Your Way." Peter Frampton was recognized by Rolling Stone as Artist of the Year, and his iconic success was solidified. I'm in You, released in 1977, came next, and the title track gave Peter Frampton a hit single.

The coming years brought some disappointing turns to Peter Frampton's career, including a car accident and subsequent drug addiction from which he recovered. But in 1979, Where I Should Be was released and went gold, although it would be another seven years before Peter Frampton would release another album.

Premonition was released in 1986, and Peter Frampton followed up with Relativity and numerous tours in 1994. Frampton Comes Alive III followed the next year.

In the 1990's, Peter Frampton toured with Ringo Starr's All-Starr Band and released his first live DVD, Live in Detroit.

Now, his first studio album in nine years, followed in 2004 and in 2006 the instrumental album Fingerprints was released to critical acclaim, earning Peter Frampton a Grammy Award for Best Pop Instrumental Album.

Thank You Mr. Churchill came in 2010, and was followed with a tour alongside Yes. That same year, Oprah Winfrey selected Peter Frampton as one of her favorite musicians and he performed on her show.

For more information on booking Peter Frampton, please contact Booking Entertainment. One of our top booking agents will be happy to work on your behalf to get you the best possible price to book any big name entertainer for your upcoming public, private or corporate event worldwide.

Booking Entertainment works to get the best possible Peter Frampton booking fee and Peter Frampton price for our clients while also providing the celebrity or famous entertainer with the level of professionalism and industry norms that they expect from an event run by a professional booking agency and production management.

Booking Entertainment uses our agency / management relationships and over 25 years of production experience to help buyers of headline / top name entertainers and does not claim or represent itself as the exclusive Peter Frampton agent, manager or management company for any of the artists on our site.

Booking Entertainment does not claim or represent itself as the exclusive booking agency, business manager, publicist, speakers bureau or management for Peter Frampton or any artists or celebrities on this website.