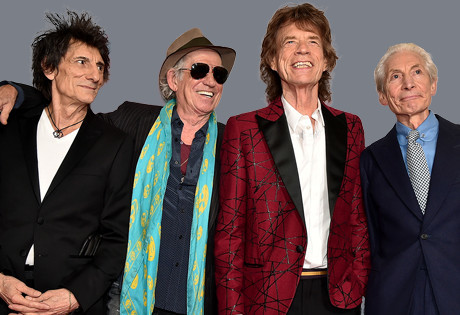 Start by filling out our no-obligation entertainment request form to check pricing and availability for The Rolling Stones or whoever else you may want.

The Rolling Stones came together in London in 1962, when childhood friends Mick Jagger and Keith Richards reunited at a railway station one afternoon. According to legend, Jagger was holding a Muddy Waters album in his hands, sparking a conversation about their mutual interest in music. Shortly thereafter, the duo met Brian Jones one evening in a jazz club, and formed the original Rolling Stones line up with the addition of Dick Taylor and Ian Stewart.

The five performed for the first time as the Rolling Stones in 1962 at the Marquee Club. Within the next two years, Bill Wyman and Charlie Watts joined the lineup, and the group secured a recording contract. The Rolling Stones’ first single was a cover of “Come On,” originally recorded by Chuck Berry, in 1963. The hit singles “I Wanna Be Your Man” and “Not Fade Away” followed, and the rest is history. For the next three decades, the Rolling Stones scored hit after hit, including: “Time is on my Side,” “The Last Time,” “I Can’t Get No Satisfaction,” “As Tears Go By,” “Paint It, Black,” “Mother’s Little Helper,” “Ruby Tuesday,” “Jumpin’ Jack Flash,” “Honky Tonk Women,” “Brown Sugar,” “Angie,” and “Miss You.”

In the new millennium, the Rolling Stones are still going strong, with the current lineup of Jagger, Richards, Charlie Watts, and Ronnie Wood. They released A Bigger Band in 2005, after an eight-year hiatus, and scored a hit with the single “Streets of Love” in the UK. The year 2012 marked the 50th anniversary of the Rolling Stones, and the band celebrated it with the release of a hardback commemorative book, an HBO documentary called Crossfire Hurricane, and a new compilation album, titled GRRR! The Stones have embarked on extensive tours nearly every year between 2013 and 2017, and their 2016 album Blue & Lonesome reached top five status on the mainstream charts in both the UK and the United States.

Since their inception, the Rolling Stones have enjoyed an induction into the Rock and Roll Hall of Fame in 1989 and earned a spot in the top ten on the 100 Greatest Artists of All Time list. Their estimated records sales exceed two hundred million worldwide, and they have released over twenty albums thus far. Billboard Magazine ranks the Rolling Stones as the second most successful band on the Billboard Hot 100 chart and in the top ten on the Billboard Top All-Time Artists list. Most recently, the Rolling Stones re-entered the studio in the fall of 2017 to prepare for yet another studio album, scheduled for release in the following year.

For more information on booking The Rolling Stones, please contact Booking Entertainment. One of our top booking agents will be happy to work on your behalf to get you the best possible price to book any big name entertainer for your upcoming public, private or corporate event worldwide.

Booking Entertainment works to get the best possible The Rolling Stones booking fee and The Rolling Stones price for our clients while also providing the celebrity or famous entertainer with the level of professionalism and industry norms that they expect from an event run by a professional booking agency and production management.

Booking Entertainment uses our agency / management relationships and over 25 years of production experience to help buyers of headline / top name entertainers and does not claim or represent itself as the exclusive The Rolling Stones agent, manager or management company for any of the artists on our site.

Booking Entertainment does not claim or represent itself as the exclusive booking agency, business manager, publicist, speakers bureau or management for The Rolling Stones or any artists or celebrities on this website.