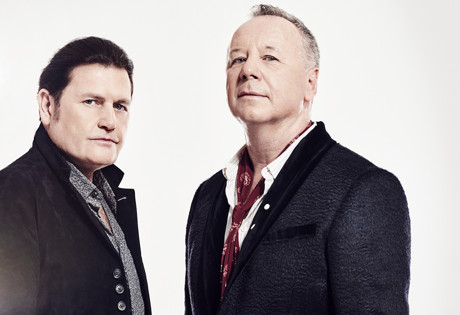 Start by filling out our no-obligation entertainment request form to check pricing and availability for Simple Minds or whoever else you may want.

Our Simple Minds agent will be happy to help you get Simple Minds's availability and booking fee, or the price and availability for any other A-List entertainer, band, comedian or celebrity you may want for your corporate event, private party, wedding, birthday party or public show.

The Scottish rock band Simple Minds was formed in 1977 in Glasgow. The group began as the punk band known as Johnny & the Self-Abusers, and became well-known in Scotland, performing frequently at summer concerts and small festivals. But the band eventually split into two sub-groups, with one group forming Simple Minds. With members Jim Kerr, Charlie Burchill, Brian McGee, Derek Forbes, and Mick MacNeil, Simple Minds went on to garner a deal with Arista Records, releasing the deubt album Life In a Day in 1979.

The album was a moderate success, rising into the top forty on the charts, but it did not spawn any significant singles. The album Real to Real Cacophony followed, presenting a slightly different new wave sound, and fared slightly better, but it was the 1982 album New Gold Dream (81-82-83-84) which became the breakthrough for Simple Minds, spawning the chart-topping singles “Glittering Prize,” “Promised You a Miracle,” “Colours Fly and Catherine Wheel,” and “Someone Somewhere in Summertime.” But the biggest commercial boost for Simple Minds came with the inclusion of their song “Don’t You (Forget About Me)” in the smash hit film Breakfast Club. Both the film and the song went on to become an anthem for a generation, and paved the way for success which would last well into the new millennium.

Simple Minds experienced a dip in popularity in the 1990’s, but resurfaced in 2010 to significant success. In recent years, Simple Minds has launched a series of successful tours and recently released an entirely new studio album, Big Music, their first in nearly a decade.

For more information on booking Simple Minds, please contact Booking Entertainment. One of our top booking agents will be happy to work on your behalf to get you the best possible price to book any big name entertainer for your upcoming public, private or corporate event worldwide.

Booking Entertainment works to get the best possible Simple Minds booking fee and Simple Minds price for our clients while also providing the celebrity or famous entertainer with the level of professionalism and industry norms that they expect from an event run by a professional booking agency and production management.

Booking Entertainment uses our agency / management relationships and over 25 years of production experience to help buyers of headline / top name entertainers and does not claim or represent itself as the exclusive Simple Minds agent, manager or management company for any of the artists on our site.

Booking Entertainment does not claim or represent itself as the exclusive booking agency, business manager, publicist, speakers bureau or management for Simple Minds or any artists or celebrities on this website.