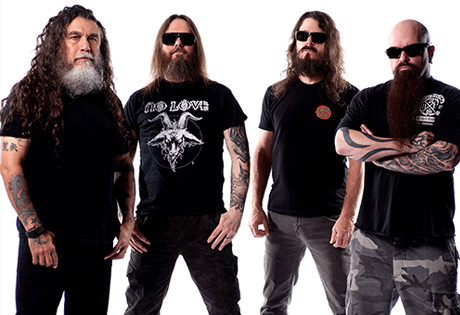 Start by filling out our no-obligation entertainment request form to check pricing and availability for Slayer or whoever else you may want.

Our Slayer agent will be happy to help you get Slayer's availability and booking fee, or the price and availability for any other A-List entertainer, band, comedian or celebrity you may want for your corporate event, private party, wedding, birthday party or public show.

The thrash metal band Slayer was founded by Jeff Hanneman and Kerry King in California in 1981. Slayer’s earliest beginnings were at local clubs around the southern California area, until they were discovered by a record company executive. After signing with the burgeoning label Metal Blade Records, Slayer began work on its debut album, Show No Mercy, which was released in 1983. The album brought Slayer an underground following, selling more than 20,000 copies. Slayer’s sophomore effort, Hell Awaits, brought them to the attention of a much larger label, though, and the band switched to Def Jam, just in time for their mainstream breakthrough.

Reign in Blood arrived in 1986, and rose into the Billboard charts. The album certified gold and Slayer launched a world tour alongside the band Overkill, further expanding their fan base and eventually making Slayer one of the “Big Four” thrash metal bands (the others being Megadeth, Metallica, and Anthrax.) Since Reign in Blood, Slayer has released a series of highly successful metal albums, including: South of Heaven (1988), Seasons in the Abyss (1990), Divine Intervention (1994), Undisputed Attitude (1996), Diabolus in Musica (1998), God Hates Us All (2001), and Christ Illusion (2006.) Although the band has not placed many singles at the top of the charts, the songs “Hate Worldwide” and “World Painted Blood,” both from their most recent album World Painted Blood (2009), both reached into the top ten on the charts.

Slayer has won two Grammys, both for Best Metal Performance, for “Eyes of the Insane” and “Final Six,” in 2007 and 2008. So far, Slayer has enjoyed record sales exceeding twenty million. The band continues to perform and record.

For more information on booking Slayer, please contact Booking Entertainment. One of our top booking agents will be happy to work on your behalf to get you the best possible price to book any big name entertainer for your upcoming public, private or corporate event worldwide.

Booking Entertainment works to get the best possible Slayer booking fee and Slayer price for our clients while also providing the celebrity or famous entertainer with the level of professionalism and industry norms that they expect from an event run by a professional booking agency and production management.

Booking Entertainment uses our agency / management relationships and over 25 years of production experience to help buyers of headline / top name entertainers and does not claim or represent itself as the exclusive Slayer agent, manager or management company for any of the artists on our site.

Booking Entertainment does not claim or represent itself as the exclusive booking agency, business manager, publicist, speakers bureau or management for Slayer or any artists or celebrities on this website.